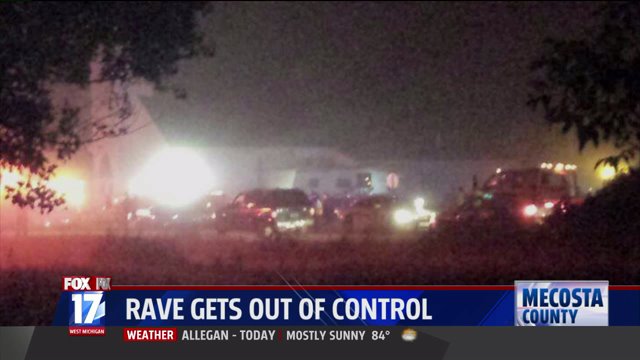 A large rave crashed by police who say the large party started through social media.

MECOSTA COUNTY, Mich. — Emergency crews are on scene of a large "social media open invite" party in Mecosta County, according to Michigan State Police who are assisting Mecosta County police.

Crews were called to the scene near the area of 5 Mile Rd. and 70th Avenue near Canadian Lakes around 1:30 a.m. Sunday.

Residents in the area say cars were lined up on 5 Mile Rd. stretching up 70th Ave. as far as up to 75th Ave. Residents claim people hosting the party were collecting $5 per car for parking and the line had been going on for well over an hour.

Viewers claiming to have attended the party said more than 1,000 people showed up.

FOX 17 is working to get more information on injuries and how many people attended.

Scene near 5 Mile Road and 70th Avenue. Picture sent in by viewer in area.

Picture from viewer posted on FOX 17 Facebook page from inside party. Says more than 1,000 people attended.