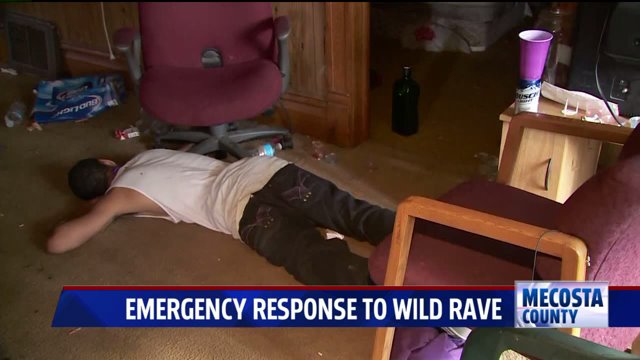 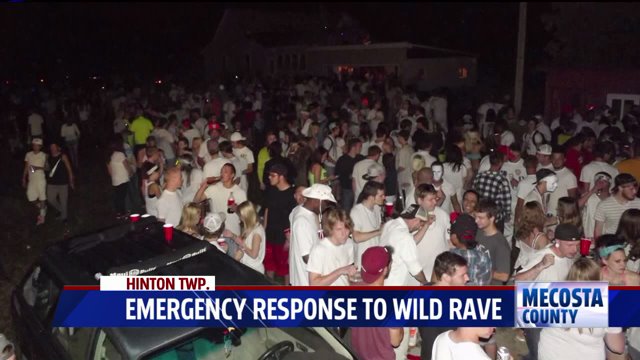 MORE PHOTOS AND VIDEO OF THE RAVE FROM FOX 17 NEWS

MECOSTA COUNTY, Mich. – In a crowd larger than 2000 people, several partygoers from Saturday’s “Project P” rave called 911 having trouble getting help for others who appeared to be overdosed, but police said they had to stay down the street to avoid a riot.

“He has no pulse, everyone knows he’s OD’ing, he’s on heroin. You guys need to come out here now,” said one partygoer who called 911.

“We just talked to somebody who’s having a heroin overdose, and they’re putting him in a vehicle and taking him out, are they not?” questioned the dispatcher.

“He’s not in a car,” responded the partygoer.

Mecosta County Sheriff Todd Purcell told FOX 17 that EMS transported at least seven people to the hospital from the rave Saturday night: six people from possible drug and alcohol overdose, then one man who fell off a barn while intoxicated, who police said was in serious condition.

Purcell said between the social media posts that police monitored and the chants and physical response from the crowd, Project P partygoers were not going to back down and break up the party. Effectively, police and ambulances were staged at the nearest street intersection.

“We were outnumbered,” said Purcell. “I have to look at the safety of the officers and the people involved.”

But according to numerous 911 calls, several of the 2000-plus partygoers felt trapped. Some called 911 multiple times to get help for people they thought were overdosing on drugs.

“Hey I just called about the guy who was overdosing. Yeah, I’m trying to get people to help him get him out and no one will help me,” said another anonymous partygoer to a 911 dispatcher.

“Okay. My ambulance can’t get there. There’s too many people,” responded the dispatcher.

“So they can’t drive up here?” asked the partygoer.

“You’re going to have to get him up to the road,” responded the dispatcher.

DJ Shane Harris of the group Strap Back was booked in advance for the rave and paid to perform. Harris told FOX 17 that the crowd got out of hand, and that it was clear that the organizers and partygoers want these rave parties. But Harris called it disorganized and unsafe.

"It was a great turnout of people, if the organization would have been better it could have gone a lot further and been a lot safer,” said Harris. "This is obviously what they want: to have parties with electronic dance music, and the thing is there's no professionalism in that sense that there's no true companies able to go book a venue and bring these artists to a safe location for these people to gather."

Party host 21-year-old James Taylor walked FOX 17 through his home and tried to wake up a man sleeping on the living room floor.

"Hey man, want to be on the news?" asked Taylor.

Taylor told FOX 17 that he is responsible for this party, but not for what others did.

“I am. It's my house,” said Taylor. “You got to deal with it afterwards, but apparently it was worth it."

The Mecosta County Prosecutor’s Office said they are reviewing the initial police investigation and charges are pending.