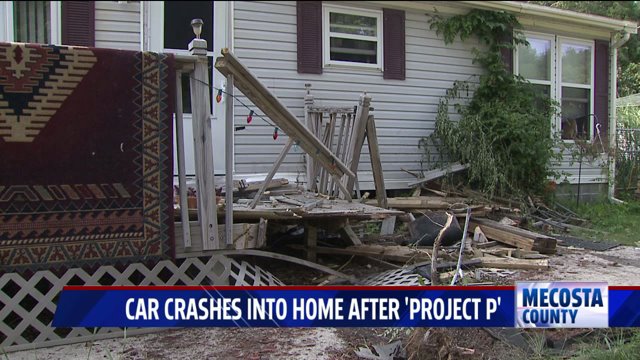 MECOSTA COUNTY, Mich. -- A homeowner in Mecosta County is cleaning up after a vehicle ran into their yard, knocking their home off its foundation.

Law enforcement said that the driver of that vehicle was under the influence and leaving the massive “rave” party that’s been called “Project P” on social media.

Robin Pullman said that she’s lived in her Mecosta County home since 1996.

"I come home to this and it's like a nightmare," said Pullman.

Pullman said that at about four o'clock in the morning on Sunday, she received a call from the Michigan State Police. Pullman said that troopers told her that an intoxicated driver flew off the roadway and into her front yard, taking out her deck in its path, before smashing into the home.

"From this big party they had. I guess it was on Facebook and people were bragging about it, and the officer said, 'Yes, that's where they were coming from,'" said Pullman.

"The officer told me that before he got this call, that they were busy doing overdoses. What are these kids thinking?" recalled Pullman.

Now sorting through insurance claims, and looking at what’s left of her front yard, Pullman said that anyone who attends another party in the area should take extra precaution before some is seriously hurt.

"I hope they think twice before they go to another party and have more respect for people's stuff when something happens," said Pullman.

Ironically enough, Pullman said that over a decade ago, another vehicle flew off the road and hit a boat they had parked in the driveway.