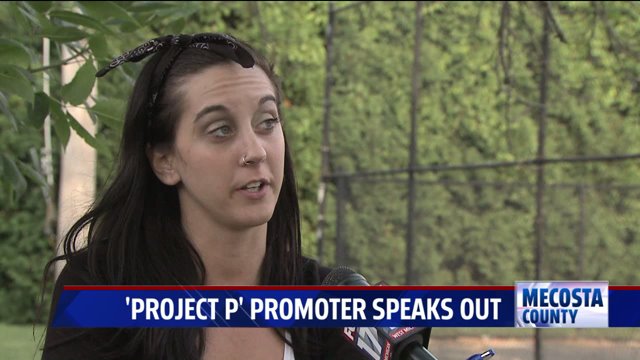 Brittany Johnson, 20, said that she lead the social media movement for the house party that`s been titled "Project P."

MECOSTA COUNTY, Mich. -- The woman who runs the Twitter page that was created to promote this weekend’s massive party at a house in Mecosta County said that she’s proud of the event’s turn out.

The woman even goes as far to say that the group plans to host another large gathering in the near future.

Brittany Johnson, 20, said that alongside her best friend, she wanted to promote a party for another friend’s birthday last Saturday.

Johnson said that herself and six other organizers spent hours cleaning up the yard outside the Mecosta County home on Saturday afternoon, digging fire pits and cutting the grass.

Johnson said that once she announced the location of the party on social media, attendees coined the name “Project P” for the event.

She said just hours after the party,  “#ProjectP” became a world-wide trending topic on Twitter.

"We are proud we hosted it. We, I mean we are proud to be a part of it. We are glad it happened. It is definitely something that we will always remember,” said Johnson.

Johnson said that her fellow organizers hired people to work security, and the goal was to keep everyone safe.

The Mecosta County Sheriff’s Office said that at least six drug overdoses and one sexual assault were reported.

"Stupid mistakes with obviously drug overdoses and the rape, which I mean we definitely, we didn't have any control over that. I mean people came at their own risk,” said Johnson.

Johnson said that "Project P" was round two, and that the first party took place at the end of June in Howard City.

"The first round was kind of set up all on Facebook. It was a big birthday party for a 16-year-old," said Johnson. "They were like, well we are going to make this second one ten times bigger and we were just like yeah, we are down to help, and we made the Twitter page and it just escalated from there."

Jonhson said that her group of organizers aren’t finished yet and plan on creating an even larger party in the near future.

"Will you do another one as big?" asked FOX 17. "Yes. Hopefully maybe bigger," answered Johnson.

Johnson also said that all of the money collected from parking fees will go towards the next party, but they are still in the process of choosing a location for that.