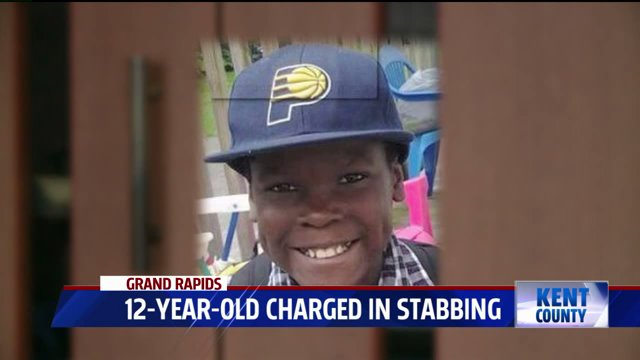 READ MORE ABOUT THE VICTIM

GRAND RAPIDS, Mich. – No cameras were allowed inside the courtroom as 12-year-old Jamarion Lawhorn sat before juvenile court referee Marie Kessler and was charged as an adult with open murder.

Family members sobbed as the very small boy walked into the courtroom wearing a blue juvenile detention center uniform and shackles on his hands and feet.

“Obviously concerned with his youth and the situation,” defense attorney Charles Boekeloo said.

Boekeloo put his arm around the boy as he sat next to a family member and was charged as an adult for open murder in the stabbing death of nine-year-old Conner Verkerke.
“A 12-year-old committing murder, you know it’s obviously pretty serious,” Assistant Prosecuting Attorney Laura Clifton said.

Serious charges against such a young boy who just turned 12 in March. Both the prosecution and defense say they’ve never seen someone so young charged with murder before.

When asked if he understood the murder charged, Lawhorn said only, “Yes.” Boekeloo entered a not guilty plea for the boy.

“I don’t know if a person this young has been charged with this kind crime in the state. Maybe once or twice in the past but certainly not often,” Boekeloo said.

Lawhorn is being held in a juvenile detention center on no bond, Kessler says that’s due to the seriousness of this crime.