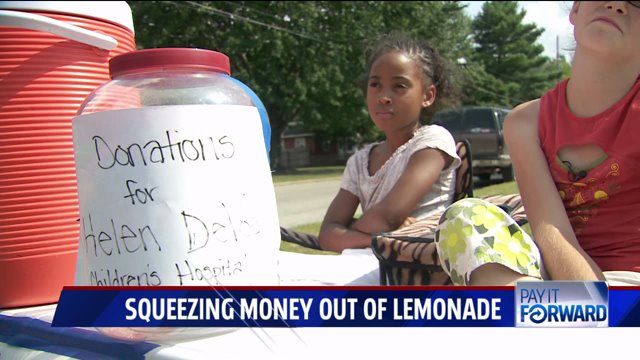 An 11-year-old girl in Wyoming has set up a lemonade stand to raise money for sick kids.

WYOMING, Mich.,-- Lilly Long has set up an impressive summer business outside her home on Janet Avenue. The 11-year-old officially opened her lemonade stand about a week ago, selling her product for just 75 cents a cup from noon-8pm on most days.

Long told FOX 17 she created the stand to raise money to help a sick friend. Katie Long, Lilly's mother, said the girl who attends West Godwin Elementary School with her daughter, is currently a patient at Helen DeVos Children's Hospital in Grand Rapids.

"I heard about my friend having surgery so I thought maybe I should help with charity to help raise money for cancer beating, to see if that could help beat cancer," Lilly explained. "We should help beat it for everyone so these nightmares can end."

Long has set a goal of $100 dollars and has quickly been raking in the profits.

"I'm selling [each cup] for 75 cents, but people keep giving me dollars, saying keep the change," she said.

The girl admits that a small portion of her profits will be used to buy a few books for herself, along with more supplies.

"I am very proud, I'm honestly speechless," Katie Long told FOX 17 News. "She said she wanted to donate all the money and it's her choice."

If you'd like to stop by, the stand is located at the corner of Janet Avenue SE and Madison Avenue SE.