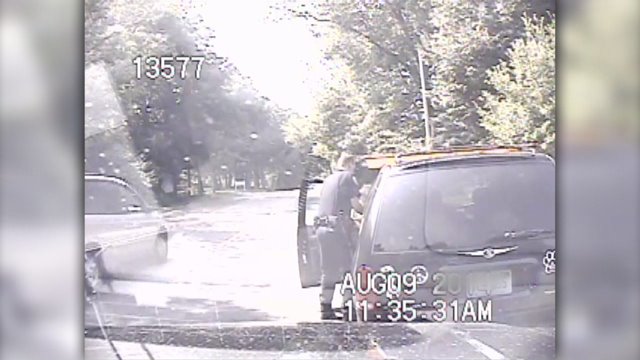 KALAMAZOO, Mich. --Kalamazoo Public Safety Officer Jason Gates is being hailed a hero after saving the life of a driver who was choking.

It all unfolded around 11:20 a.m. Saturday August 9, when Officer Gates pulled a woman over for a red light violation in the 4100 block of S. Burdick Street. Officer Gates says at first he thought she was trying to get out of a ticket but he quickly realized the woman was in serious respiratory distress.

Dash cam video from the incident shows Officer Gates asking the woman if she was okay, and when he realizes she's in trouble, he administers a couple of back blows. When that doesn’t work, you can see Gates quickly pull the woman from the car and administer the Heimlich maneuver.

Within seconds, the food was dislodged. Officer Gates says he has never used the Heimlich before in his nine year police career, but says he is just glad she is OK.

"I'm just glad that I was there and it worked."

In the video you can see the woman immediately begin to cry and hug Officer Gates, thanking him, something Gates says he didn't expect.

The woman did not get a ticket.