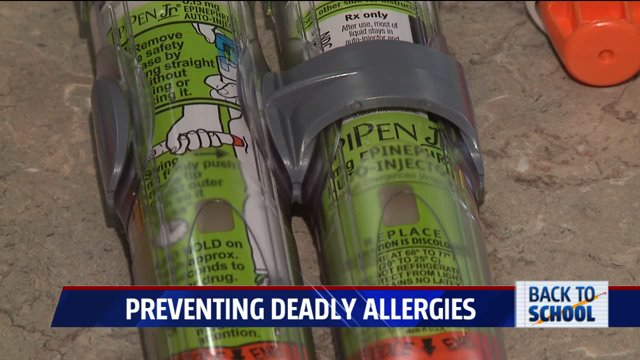 The new law means schools like GRPS and others are training staff on how to administer the devices. 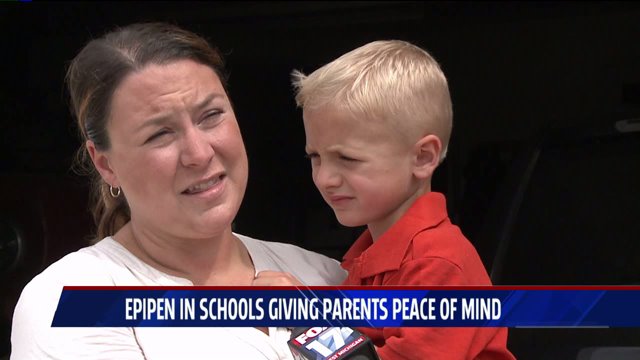 GRAND RAPIDS, Mich. — It's a device that could be life-saving, but that doesn't necessarily mean it has always been readily available, at least until now.

This school year, every school in Michigan must have at least two Epipens in the building at all times, with at least two individuals trained on administering the device. As students across West Michigan get ready to head back to the classroom, preparations for the new mandate are well underway at local districts.

“We provide training on recognition of anaphylaxis: what are the symptoms they might see that help them know they’d need to give the Epipens, on how to talk to the child, and how to give the epinephrine shot," said Stephanie Painter, director of health services for Grand Rapids Public Schools.

GRPS allowed FOX 17 to sit in on a training session Monday with school health aids from seven area districts—all part of the "School Health Advocacy Program"—to get a look at how the aids are being taught to administer an epinephrine device when dealing with a possible allergic reaction.

The "School Health Advocacy Program" — which includes GRPS, Cedar Springs, Comstock Park, Wayland, Montcalm Intermediate, Kentwood and Greenville — has been in partnership with Spectrum for nearly two decades with its own set of mandates for things like Epipens in the classroom where training is offered annually, according to Painter.

“Part of this training and preparedness with staff is the likelihood they’ll need it today or tomorrow is pretty small, but when it does happen, are they going to be able to react in an emergency situation? And I think that’s the piece we offer," she said.

In the United States, one in 13 — or roughly 2 children in every classroom – have a food allergy, according to the FARE, the Food Allergy Research and Education Center.

Districts can either find a private company willing to donate the epinephrine pens or they can purchase the devices themselves and apply for a reimbursement through the Michigan Department of Education.

In Kalamazoo County, KRESA has partnered with the Van Buren ISD to offer training and Epipens to schools. Approximately 170 pens donated by Mylan Inc. have been distributed to county schools, according to Gary Brown, an administrator with Van Buren ISD.

The donated Epipens have saved the district about $20,000, Brown said.

Elsewhere in West Michigan, Kent ISD and Muskegon ISD are also offering training courses but districts in both areas will be responsible for securing their own Epipens, either through donation or purchase.

Kent ISD has two more training session planned for Thursday, August 27, for area educators interested in being trained by a registered nurse.

The new mandate means Heather Cook of Zeeland, Mich., whose son suffers from a severe peanut allergy, can rest a bit easier sending him off to preschool this fall, knowing schools are taking extra precautions to ensure students avoid life-threatening allergic reactions.

“It’s nerve wracking,' Cook said. "He could eat a peanut, and he could be on life support,. That’s just how it is." Cook wrote a blog this past May about her son's allergic reaction to nuts.

“It makes me happy to know if there are other kids who haven’t been tested but they do have an allergic reaction that there is something there for them.”

“There hasn’t been as much focus on allergies in the past, but now it’s kind of a big deal. Gluten, peanut, shellfish, everything, it's everywhere.”