Over half a foot of heavy, wet snow to coat some in West Michigan this weekend
NewsProblem Solvers 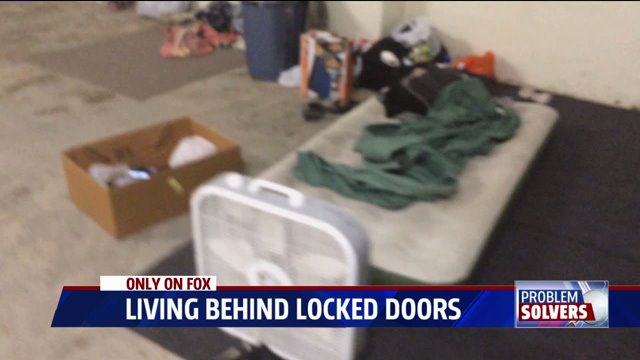 GRAND RAPIDS, Mich. - From the outside, a building in the 2000 block of South Division Avenue in Grand Rapids looks unoccupied and forgotten.

Video taken of the inside of the building from a FOX 17 source, however, shows evidence that several people call this building home.

"They just had sleeping bags, blankets on the floor, some were sleeping on a makeshift workbench and just living out of suitcases," said the source, who wished to remain anonymous.

A number of items can be seen in the video along with evidence of people sleeping next to a garage door and others tucked into a nook of a stairwell.

"Just a couple toilets, man-made showers," said the source.  "These rooms were no bigger than a six-by-six room.  There was no fire exit, no egress windows, nothing for these people to get out of if a fire was to happen."

The video was allegedly recorded in July.

"When I went inside, I noticed there was a lot of bedding," he said,  "living conditions for about 30 to 40 people."

Records show the building belongs to the owners of Lavandaris Jalisco Laundromat, which is located directly across the street. We stopped by and spoke with son of the owner, who refused to give an interview on camera.  He told us a family currently lives in the building in question, and they have plans to make it an apartment.

He also said there are houses everywhere holding, in his words, migrant workers.

"They are the ones picking our blueberries," he said.

We were then asked to leave the laundromat.

Later that night, we watched a white van pull into the alley behind the same boarded up building.  We recorded both children and adults get out of the van and make their way across the alley towards the building.

Grand Rapids police say they get occasional complaints about alleged illegal housing operations in the city.  Police stopped by the property shortly after we offered to show them the video we obtained. Police told us the doors were locked and no one was there when they paid a visit.

A source within the U.S. Department of Homeland Security said they watched the property for days after getting a call from FOX 17. Their investigation showed the building was gutted of all material and a 'For Rent' sign has been placed in front.

The Homeland Security investigator told FOX 17 the video shows some of the worst conditions he has ever seen.

We were told they will continue to follow-up with an investigation.