Grocery store cashier says he was fired for hugging a customer 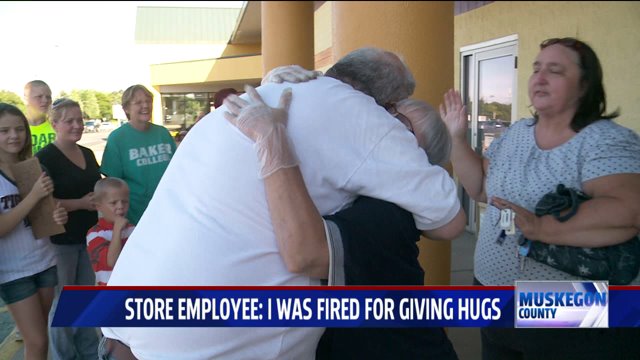 WHITEHALL, Mich. - A Muskegon County grocery store employee says he was fired for giving a customer a hug.

It's controversy that's ripping through the small community of Whitehall and has Fred Civis accused facing charges.

Civis says it was just a hug, a friendly way he has greeted customers throughout his 39 years at Plumb's Valu-Rite Foods.

Fred Civis claims he was fired from grocery store for giving a hug.

But the alleged victim felt differently, leading to Civis’ termination and criminal charges.

A Facebook page called "Boycott Whitehall Plumb's for Fred" started this week as members of the community rallied together Wednesday in support of Civis, holding signs and chanting “We want Fred!”

Civis says on July 24 he was fired a few days after the customer complained. But the incident was far from over when a sheriff’s deputy came to his home and arrested him on charges of misdemeanor assault and battery.

The situation inspired Whitehall resident Timothy Cooper to start a Facebook page in support of Civis.

“I just want to cry, because it makes me feel great,” Civis said of the support.

“Fred’s been here almost as long as Plumb’s has," Cooper said. "I remember Fred when I was young. he`s been here close to 40 years.”

“Plumbs Value-Rite Foods is committed to providing a safe, enjoyable shopping experience for all of our customers. We have policies in place at all of our Plumb’s locations to ensure that everyone who comes to our store is treated appropriately and respectfully.

"The decision to terminate Fred Civis from our Whitehall Market was difficult. The decision came after multiple violations of our policies, one of which resulted in a criminal complaint from a shopper at our Whitehall store. Though we have received strong criticism for our decision we remain firm in our belief that the safety and comfort of our customers must always come first.

"We are honored to serve our customers as their neighborhood market and we will continue working to ensure that Plumb’s customers have the finest shopping experience anywhere.”

While supporters protested Civis’ termination outside Plumb’s, an employee came outside and gave Civis a hug and told him she misses him.

Civis will be back in court for a preliminary hearing for the misdemeanor assault and battery charge on Sept. 16.