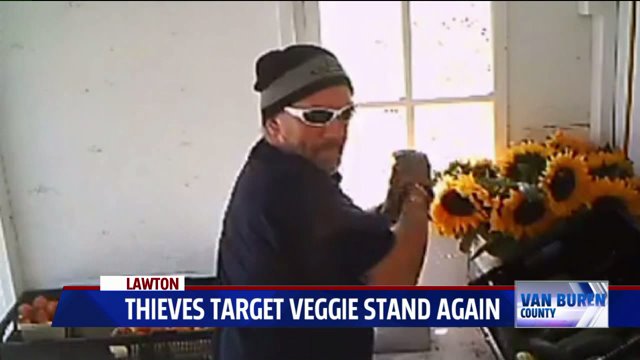 LAWTON, Mich. – A Lawton farmer caught several thieves on camera stealing food and cash from his fresh produce stand, which uses the honor system and locked cash box, on M-40.

One recent video shows a woman who blatantly loaded up her car with produce, including butternut squash, several bags of corn, and a basket full of peppers. Nesbitt said she allegedly stole the food before 11 A.M. on Sept. 2, then by 7 P.M. the same day she returned everything but the peppers to the produced stand.

Michigan State Police Lieutenant Dale Hinz told FOX 17 this woman is one of two identified suspects, who will likely be charged with misdemeanor larceny.

“So far we’ve made several attempts to interview her, and all have been unsuccessful to track her down,” said Hinz.

The second identified suspect is a middle-aged man seen in a posted video, who wore sunglasses, a hat, and cigarette in mouth, while he used bolt cutters to open Nesbitt’s locked cash box. You can see him pry open the box, grab the cash, and run back to his parked black truck. Hinz told FOX 17 that the man avoided a police interview and will likely face charges as well.

“We’re beyond the point in society where you can leave stands unmanned with a cash box unfortunately, but short of that the camera system is a good alternative,” said Hinz.

Nesbitt said he has had up to $400 worth of supplies, produce, and cash stolen from his stand recently. Now Nesbitt said he plans to run a manned stand with a cashier, similar to a farmers’ market, within the year.

Hinz said he suggests all stands be manned or at least have a video surveillance system.

“(Nesbitt’s) system is obviously very good: the quality of it is excellent,” said Hinz. “In fact, it’s better than I’ve seen in some convenience stores.”