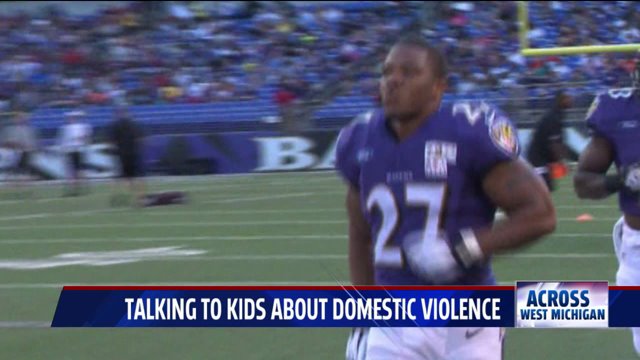 GRAND RAPIDS, Mich. - It's a video that speaks for itself.  Ray Rice, a pro-bowl NFL running back punching his then fiance, now wife, in the face in a hotel elevator back in February,

The video was released online by TMZ and is generating a lot of reaction.  Reaction is even coming from the subject of the video.

Ray Rice said, "What happened that night is something that should have never happened, and like I said, I have to pay for that for the rest of my life because my daughter is very intelligent and she is going to want to know what happened.  She's gonna press Google one day, and that's just how fast these messages go worldwide.  That's how fast my daughter is going to be able to pick up her phone and Google her father's name and it's gonna come up.  Now how many touchdowns I scored, it's gonna come up about what happened."

In West Michigan, the video raises some concerns from parents when it comes to their kids watching.

Joe Martino is a therapist for Creative Solutions Counseling in Grand Rapids and says 'Hero Worship' is real and it can affect kids and adults alike.

"We tend to excuse really poor behavior from people who entertain us, who help us feel like winners and that's really where hero worship comes from," said Martino.

Martino said he knows there are fans of Rice who will still try and justify what they see in the video.  He said when that happens the results can be dangerous especially if they are parents.

"It creates an opportunity for all of us to say, okay, here are my morals but here are my sports morals and those are two different things," said Martino.

In a situation like this, Martino said you shouldn't wait for a child to approach you with questions about what they've seen in the video.

He recommends parents use this as an opportunity to talk about an issue that he feels is sometimes brushed aside.

"There are literally people who are afraid of the very person who promised to protect them for the rest of their lives and that is just unacceptable," said Martino.  "As a society we need to stand-up and say this can't happen."

As for the professional consequences for Rice he was released from his team and suspended by the NFL indefinitely.

Martino said it's important to make sure children have a mix of heroes in their lives.  He said it's alright if some are professional entertainers but it's also important for parents to act like a hero as well.

If you or someone you know is a victim of domestic violence the YWCA would like you to know there is help available.