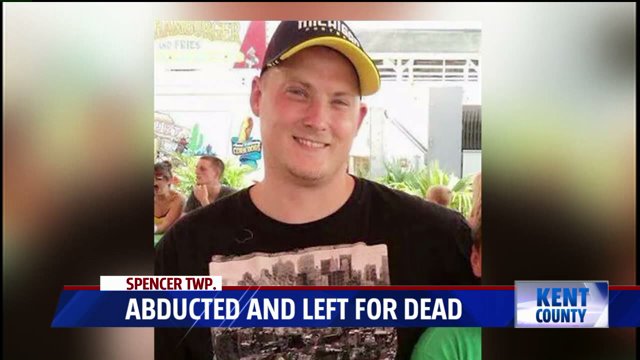 34-year-old Brent Luttrell was left for dead in a road yards from his house following a home invasion Monday morning.

Autopsy results show Luttrell died from multiple stab and gunshot wounds. His body was found only a few hundred yards from his home near Pine Wood and Lincoln Lake Ave.

Deputies in Kent County say the incident happened at around 1:00 a.m. in the area of Pinewood Street and Lincoln Lake Avenue southwest of Gowen when at least four suspects wearing either masks or bandannas over their faces broke into the home.

All four suspects, including an apparent getaway driver are still on the loose. The getaway car is described as a red or burgundy passenger car.

Luttrell was apparently forced into the car the suspects were riding in before being dumped onto the road on Lincoln Lake Ave. just down the street from the home where he was later found dead.

Four adults, including the victim, and one child were inside the home at the time of the incident. One other male—the victim's cousin—sustained facial injuries after being assaulted.  The two other adults, girlfriends of the two men, and the child were not injured.

Deputies would not confirm nor deny whether any drug-related activity inside the home lead to the incident, but detectives did execute a search warrant on the home and could be seen carrying several bags out of the home. Neighbors in the area said they suspected the incident wasn't random considering the activity happening around the home.

“Just the traffic, we hear it all throughout the night  going in and out, people shining lights in our windows," said Frederick Rudsman, who lives nearby.

“I’m pretty sure, I mean it’s drug activity, nobody around here is really stupid about it, we know what goes on.”

It's a sentiment echoed by longtime resident on the street Marco Lopey.

“But when you see Trans Ams, and Corvettes, and Camaros, going in and out of the driveway what does that  tell you? And they’re only there a couple minutes," he said.

“Murder, I was surprised to hear that, robbing or something like that maybe, we’ve had a lot of different things going up and down this street here, but boy this is getting spooky man.”

Family members on scene declined to comment other than to say they deny the allegations made my neighbors of drugs or other possible illegal activity happening inside the home.

Anyone with information is asked to contact the Kent County Sheriff’s Office at 616-632-6100.