‘Get the Lead Out’: Program to help families make homes safe 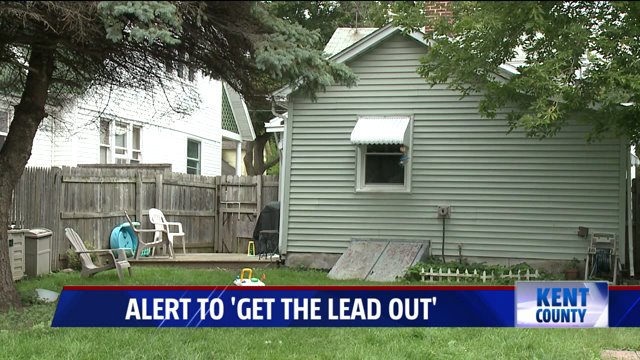 A family in Grand Rapids is sharing how the program provided special funding to make their house safe after their toddler tipped them off to the hidden danger in their home.

GRAND RAPIDS, Mich., -- Jennifer and Eddie Carmona had no idea their older home was hurting their young son Jaxon, until the toddler tipped them off to the hidden danger lurking in the house.

Tests run on the two-year-old revealed an extremely high level of lead.

"His lead level was really high, 26 the first time," mom Jennifer Carmona told FOX17 News. "We didn't have any chipping paint necessarily and we didn't know about the yard and the dogs tracking it in. Just various things like that you don't really think of."

The Health Department referred the family to a program called "Get the Lead Out!" The program, which is led by the City of Grand Rapids in collaboration with the Healthy Homes Coalition of West Michigan, the Kent County Health Department and the Rental Property Owners Association, provides funding to qualifying homeowners to remove the hazards in their home.

The Carmonas said the process cost them very little, especially considering the "pros" outweighing the "cons". The family had their windows replaced, garage re-sided and the lawn was also re-seeded to prevent their dogs from unknowingly tracking lead into their home.

"It's definitely going to be worth it," Eddie Carmona said. "It only made our house better."

Jaxon is also doing-- and testing-- much better.

"Zero is ideally what you would want, but his last test was four and that's really good," Jennifer said. "Don't just think it's not a big deal, because it really is. It's permanent brain damage that can happen and that's a pretty big deal."

Applications are due by December 1st.

The following information was provided by Get the Lead Out! Grand Rapids

Special funding for safely removing childhood lead poisoning hazards from eligible homes in Grand Rapids is available to qualifying homeowners and landlords – but there’s a window of time to take advantage of the opportunity.

To be considered for the funding, applications should be received by Dec. 1.

Those living with children ages five or younger in Grand Rapids homes with lead-based paint can apply for the program. For a family of four to qualify for the program, annual household income must be below $50,500.

Get the Lead Out! – impact on housing and health outcomes
The funding is through Get the Lead Out!, a program led by the City of Grand Rapids in collaboration with the Healthy Homes Coalition of West Michigan, the Kent County Health Department and the Rental Property Owners Association.

Since its inception 10 years ago, Get the Lead Out! has made more than 1,350 homes in Grand Rapids lead-safe. The collaboration began in 2004 in response to very high childhood lead poisoning levels in specific neighborhoods in Grand Rapids.

To date, more than $16.1 million in funding has been provided by the U.S. Department of Housing and Urban Development to make homes lead safe in the city of Grand Rapids. Current funding lasts through May 2015, with program officials recommending that applications be completed by Dec. 1 before funding runs out. Project partners anticipate applying for additional funding in 2015, but the process is competitive and local funding is not guaranteed.

The program has had a direct impact on improving health outcomes of children in the area. In 2004, the year home repairs began, 2,666 Grand Rapids children 0-5 years of age were identified with elevated blood lead levels (?5.0 ug/dL). In 2013, 426 Grand Rapids children tested above that level, an 84 percent reduction.

“Over the past decade, the program has been successful in keeping children in the city safe from lead poisoning by removing lead-based paint from more than 1,350 homes at little or no cost to homeowners,” said Connie Bohatch, managing director of Community Services at the City of Grand Rapids.

But there’s more work to do: current statistics

Grand Rapids’ 49507 zip code leads the state for the number of lead-poisoned children in 2013, according to a report recently released by the Michigan Department of Community Health.

The number of children in Kent County with lead poisoning in 2012 was one and a half times the national rate, according to the Kent County Health Department.

In 2013, 5.3 percent of Kent County children birth through age five had blood lead levels above the Center for Disease Control’s reference level – enough to cause neurological damage and learning disabilities. That translates into 551 children in Kent County who were identified with elevated lead levels in 2013 alone.

In children, lead poisoning causes life-long brain damage, and poor physical growth and development. It can lead to social and behavioral problems, and learning disabilities.

“The impact of lead poisoning on cognitive outcomes and behavior has been devastating considering the numbers of children affected,” said Ron Hofman, MD, a local pediatrician.

Lead poisoning can even cause death.

Lead dust and paint chips found in the interiors and on the exteriors of homes built before 1978 can be ingested by small children living in and playing around these homes. More than 85 percent of the housing stock in the City of Grand Rapids was built before 1978, the year lead-based paint was banned.

It doesn’t take much to create a toxic situation. “One gram of lead dust is enough to make 25,000 square feet of flooring hazardous for young children. A packet of Sweet’N Low for your coffee is one gram. That amount is enough to contaminate a dozen homes in Grand Rapids,” said Paul Haan, executive director of the Healthy Homes Coalition of West Michigan.

A recent University of Michigan study estimated the economic cost of lead poisoning in Michigan to be $300 million annually. See http://www.healthyhomescoalition.org/news-feed/post/45/LeadCoststhePeopleofMichigan300MillionEveryYear.

“The cost of lead poisoning – in terms of medical treatment, special education, juvenile and adult justice and lifetime lost earnings – far outweighs the cost of fixing the home. When we fix the home before a child is poisoned, we not only save money, but we also protect children from undue harm. We need to ask ourselves: Where would we rather spend the money? Fixing houses, or treating children in hospitals and paying for corrections?” Haan said.

If there is a lead-poisoned child in a Grand Rapids home, all repairs are made for free under the Get the Lead Out! program.

Applications for the Get the Lead Out! program are available at the following locations:

Assistance with filling out the application is available at Healthy Homes Coalition, the City of Grand Rapids and the Kent County Health Department.

In addition to helping kids and families, another benefit of this program is that it helps the local economy.

“This program pays a lot of local contractors and inspectors. Plus, the improvements to the home can help with property values,” Haan said.