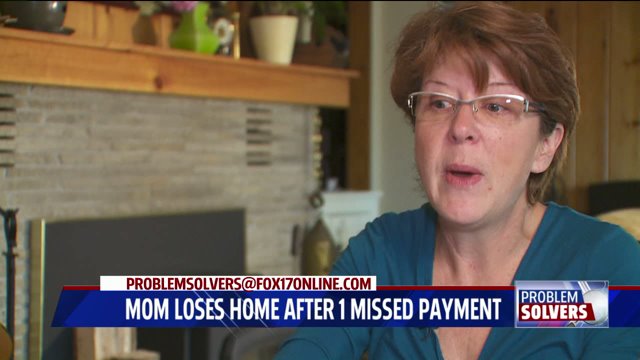 RICHLAND, Mich. -- A mother from Kalamazoo is losing her home after she missed a property tax payment.

It has been a rough couple of years for Deborah Calley, who has overcome physical and mental obstacles following a devastating car accident.

The crash happened in 2008, and it left Calley with several injuries to her arms, wrists, and neck. She said also she had four big bruises on her brain.

Calley was told the recovery process could take several years. Initially, she was unable to do most things for herself, the kinds of things most people take for granted, like driving or getting dressed in the morning.

In 2010, Calley paid cash for a home on Bunkerhill Drive in Richland that she thought would make recovery easier while she was still raising her two children. She called it her dream home.

Fast forward four years, and that dream home has now been foreclosed on after a single missed property tax payment.

Calley admits that confusion and memory problems from her accident may have played a role in the missed payment.  Additionally, her realtor Becky Doorlag said most homeowners pay just two payments a year. However, because Calley lived in a village, she also had that payment.

Still, Calley said she should have been warned that her house was about to be foreclosed on.

Court documents show several notices were sent out from the county treasurer's office over the last year. However, Calley said she didn't see a single one.

FOX 17 Problem Solvers discovered that 10 letters were sent out.  However, only one was addressed to Calley. The others were sent to banks.

"I've never been affiliated with any of those banks, ever," Calley said. A receipt from Calley's realtor shows she paid more than $164,000 in cash for the home, so she didn't have a mortgage.

As for the single letter that was addressed to her home, Calley said she didn't get that one either.

"I know for a fact that it went back to this company called Title Check, because I have a receipt from the person at Title Check who signed it at their address in Kalamazoo," Calley said.

Calley has until Sept. 19 to convince a judge that proper notice of foreclosure failed to take place. She said she wants to pay what she owes and keep her home.

"She'll pay it today if they'll let her," Doorlag said. "The government will take her home -- the only thing that she has that she owns that's paid off free and clear. That is her future and her retirement and her kids' future. She will lose it to the government unless the judge has mercy."

If the county decides to keep her home, it will be auctioned. If it's sold for more than taxes owed, Kalamazoo County will also keep the profits. The last bid was nearly $80,000.

"To take my $164,000 house over less than $2,000, I would say that's extremely excessive," Calley said, sobbing. "If I had a mortgage, a bank never would've let that happen. It was a mistake. My life has been turned upside down because of this. I had to send my youngest daughter, who's still in school, to live with her father so she can have a home, because I don't know if I have a home anymore."

FOX 17 contacted Kalamazoo County treasurer Mary Balkema, who referred us to Thom Canny, Kalamazoo County corporate counsel. He said other letters were sent to Calley in addition to the 10 listed in the court file. The county is within its legal rights to take her home, he said.

"If this was a case where there was a default or a defect in the notices, then we would agree that it shouldn't go to foreclosure," Canny said. "But, it's just too late."

FOX 17 will air the second piece to this story on Tuesday. You'll hear more on why the county is refusing to back down.