Kalamazoo Co. officials say home foreclosure is out of their control after woman’s property tax mistake 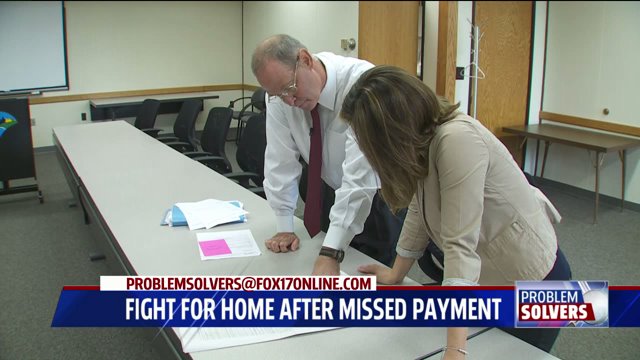 KALAMAZOO COUNTY, Mich. -- A Kalamazoo County woman continues to fight for her home after she missed a property tax payment, and a county attorney says the foreclosure is out of their control.

The debt, initially less than $2,000, is from a single missed payment from 2011. Deborah Calley said she has the money and wants to pay.

"When you have sunk your whole life savings and your whole family's future into a piece of property it shouldn't be able to go away over less than $2,000," Calley said.

However, Thom Canny, corporate counsel for Kalamazoo County, said it's too late and that the case is out of his hands.

"In this case we followed the statute and pursuing foreclosure is appropriate," Canny said.

Canny said several notices were sent to Calley's home warning her that foreclosure would take place. He showed FOX 17 a record of first class mail that was sent to the home since summer of 2013.

Calley's attorney, Ven Johnson with Ven Johnson Law, says the process to foreclosure was not properly handled. He said part of the statute is to also send certified mail, adding that only one of ten of those notifications went to Calley's address.   That notice was returned to sender.

"The county admitted in this case, under oath I might add Jessica, that the certified mail that was sent to Deb's house came back," Johnson said. "In other words, she never accepted it.  So, that means that the county knows it wasn't successful."

That's not the only discrepancy, according to Johnson.    A signed affidavit shows county treasurer Mary Balkema and deputy treasurer Greg Vlietstra visited her home and personally delivered notice of foreclosure. However in a video obtained by FOX 17, Calley can be seen representing herself during a hearing. While questioning Vlietstra as to who he handed that letter to, he admits he met Calley for the first time in his office after that delivery was made.

When Calley asks Vlietstra who he handed the documents to he responded by saying, "As I stated previously, I don't have a recollection for that property."

Canny said that not being able to recall who these types of notices are handed to is not uncommon.

"They don't know who they handed the letter to because they visit a couple of hundred properties during the course of the foreclosure process," he  said.

Confusion over who the notice was handed to is an issue that Johnson said is important to the case.

"Deb's already sworn under oath that it wasn't her," Johnson said. "She had two minor daughters at the time that could've been home. The county doesn't know if they gave it to a minor."

Canny said, while the county is required to give personal notice, it can include taping the letter to the door or handing it to someone at the home. He said it doesn't have to be given to the owner.

"They just record that they were there--they talked to somebody who appeared to be responsible," Canny said.

Calley said there's no doubt it's all because of one big mistake.

Records show Calley made two payments in 2011, but because she lived in the Village of Richland, she also owed a third payment to them, which is the one she missed.

After airing Calley's story on Monday, hundreds of people began commenting on the FOX 17 Facebook page.

Matt Coady wrote, "This just makes me sick to my stomach for this poor lady. A year behind ($2000.00) and the law is that you take this ladies 164000 home sell it and keep the proceeds. Nice. I'm glad I don't have that job. That's unconscionable."

That seems to resonate with Calley.

"Clearly I'm not the only one who thinks, 'How could this happen?' So, I started to think maybe it is about the money," Calley said.

The county could earn quite a bit of money off Calley's mistake. Not only do they get the roughly $2,000 she owes in taxes, they also get to keep the profit from the auction. That could net more than $80,000.  That's about what one bidder paid before asking for his money back.

Still, the county attorney said the process to notify Calley met standards set by state law.  When we asked Canny if the safe guards to notify people of foreclosure were error-proof he said, "I would say they're never 100 percent and if somebody raises a question we look at it."

In Calley's case, Canny said they have looked into it, adding he's sure there's nothing more they can do because the foreclosure has already taken place.

"This is an absolute abuse of power by the Kalamazoo County Treasurer's Office," Johnson said. "This is a civil proceeding. This can be set aside by an agreement between the lawyers with the approval of the judge. All the judge cares about is that everything's done legally and fairly. If Deb were to pay her taxes and the county were to agree to set aside the foreclosure all would be fine."

The fate of Calley's house will soon rest in the hands of a Kalamazoo County judge.

"It was a mistake. My life has been turned upside down because of this," Calley said. "I had to send my youngest daughter, who's still in school to live with her father so she can have a home, because I don't know if I have a home anymore."

The Association of Michigan County Treasurers is passing along tips to homeowners. It said when it comes to paying property taxes an owner has three years until a missed payment will make it legal for the county to take your home. A winter bill should arrive the week of Dec. 1. As for the summer, a homeowner will receive their bill the week of July 1. If either notice fails to show up, AMCT suggests calling the local county treasurers department.

AMCT also suggests if a homeowner gets notice of foreclosure, that they act on it before anything is finalized.

In Calley's case, she claims notices were not received. The judge will reach a decision in the case at the beginning of October.