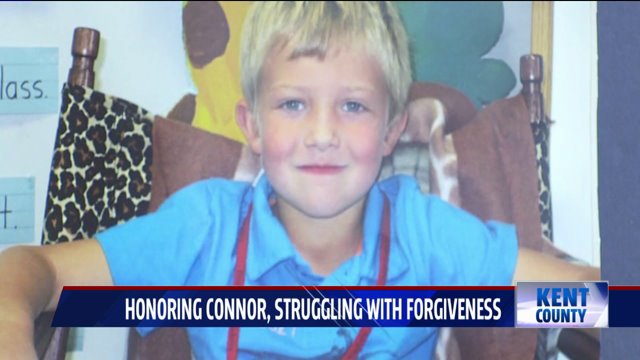 WYOMING, Mich.—Connor Verkerke, a 9-year-old boy who was stabbed to death on a playground right by his home at Pinebrook Mobile Home Park on August 4, was honored throughout the weekend. It’s a loss that shook the community, and left his family mourning the loss of their oldest son.

This weekend, two fundraisers were held in Connor’s memory and in support of his family. One was held Friday at Kelloggsville Middle School and the other on Saturday at the high school.

For the first time, the family opened up to Fox 17 News about their memories of Connor and how they plan to move forward.

Forgiveness is a word that Jared and Dani Verkerke still struggle with every single second of every single day.

“It depends on the day if we feel forgiveness. We are still on a roller coaster of emotion with everything else. So some days, yes we feel like forgiving and some days not so much,” said Dani Verkerke, Connor’s mother.

Aside from forgiveness, coming to events that honor Connor touch their hearts but also brings back memories of watching their own son slip away.

“It’s a constant reminder of what happened to us, and constantly having to relive it,” said Jared Verkerke, Connor’s father.

Dani and Jared’s loss of their first born isn’t a pain that they ever expect to heal.

The time they thought they had with Connor was lost at Pinebrook Village Mobile Park playground when police say Jamarion Lawhorn, only 12-years-old, stabbed Connor multiple times. Connor’s brother, Cameron, was there and watched as his older brother was brutally stabbed, and then tried to fight for his life.

“Cameron’s birthday was really hard. He said that he felt like this was going to be his worse birthday ever, because Connor was always at his birthdays, so he’s having a rough time,” said Dani.

Dani Verkerke says she’s returned to the playground only once since the incident upon Cameron’s request.

“Cameron felt he had to go back to the playground once to kind of show me everything, and I allowed him to do that. I could just see the whole thing as he was telling me about it,” said Dani.

For Jared, the memories of trying to stop his son from bleeding out haunt him day in and day out.

“He just kept trying to tell me that he loved me, and was trying to hold my hand,” said Jared.

Dani Verkerke can still hear Connor’s last word playing over and over in her head.

“The last thing I heard him say before going into the ambulance was ‘Mama’,” said Dani.

Dani and Jared are now advocates for change within Child Protective Services, which they say needs a lot of work. They say they emphasize with kids like Jamarion, who according to court documents, endured abuse years prior to the incident.

“I think ultimately Jamarion is responsible for his own actions. No one forced him to do what he did. It just hurts to know that a year before this happened something could have been done to maybe save him as well,” said Dani.

Forgiving is something they say they will continue to try to do, along with getting used to the fact the one of their boys is never coming home.

“That’s the hardest part. When we get off and do things as a family, knowing that there’s supposed to be four boys. That’s what’s really hard to do,” said Dani.

The Verkerke’s say a lot of people have been asking where the donations are going for these fundraising events honoring Connor. Right now more of the funds are going toward therapy sessions for the family.