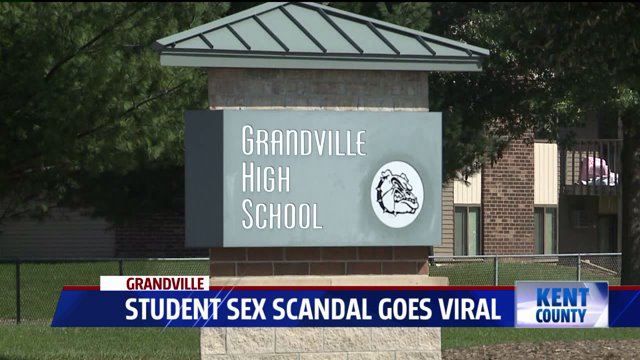 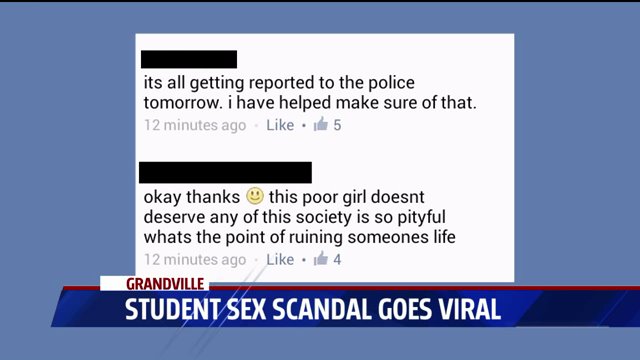 WYOMING, Mich. — As an investigation into a viral post on social media showing two Grandville teens engaged in an apparent sex act moves forward, police are taking the opportunity to again warn parents and teens of the serious consequences of posting personal information online.

"Once a photograph is texted to someone or posted, your control over that photo is relinquished and really it's out there for anybody's who is using it," said Capt. Kim Koster with the Wyoming Police Dept., which became involved in the investigation after determining it's where the photo appeared to have been taken.

The photo, showing two Grandville teens engaged in an apparent sex act, also shows four other teens who appear to be watching the act. It is is unclear where exactly the photo was taken and police have yet to confirm the exact location.

The post, which appeared on social media this past weekend, quickly went viral and sparked hundreds of thousands of responses and re-posts of the photo. Police warn those who might've shared the photo could face possible charges for distributing child pornography because the participants are underage.

“In a case where it involves a minor there could be potential criminal charges for someone who produces or transmits that information to other people," Koster said.

"You have to be very careful if you receive an inappropriate text message or photograph like that what you do with it is extremely important, you cannot distribute that further."

Grandville schools' superintendent Ron Caniff would not comment on the incident, only confirming it did not happen on school grounds or at a school-sponsored activity.

Caniff said once the district was made aware of the situation this weekend they immediately reported it to police.

"The concern right now is the age of the people involve, consent is also an issue at times as well so those are some things in any investigation like this one we'd have to determine," Koster said.

In West Michigan there have been several other incidents recently involving teens sharing or distributing sexually explicit material.

In May, the superintendent of Marshall Schools confirmed an investigation into a possible 'sexting' situation in which students were allegedly using their cellphones to send texts and images.

And in November 2013, the Rockford Public Schools superintendent said a similar situation was happening in the district's high school. It sparked a criminal investigation into whether the images were sent during the school day.