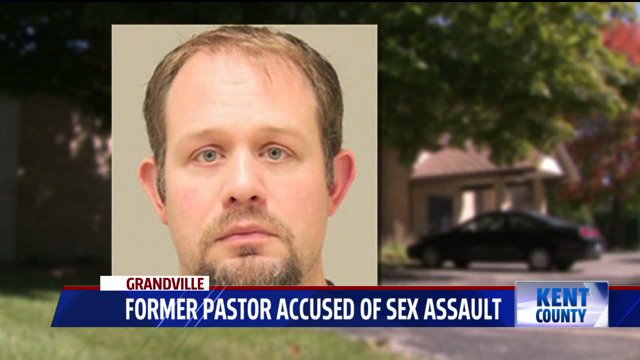 The victim alleges it happened at the Grandville Baptist Church.

GRANDVILLE, Mich. — A former youth pastor at a Grandville church was arrested on sex charges this week.

The arrest follows a police investigation prompted by allegations of inappropriate conduct involving a minor and the now former youth pastor, 34-year-old Jeremiah Behrens while he was employed with the Grandville Baptist Church.

A court affidavit obtained by FOX 17 details Behren's relationship with the young victim.

A probable cause court document obtained by FOX 17 shows the victim reported two separate incidents to police.  The victim reported that in January 2013 while she and Behrens were alone at the church, Behrens "touched her chest just above her breast on top of the clothing."

The second incident reported is said to have happened in May of 2013 when the same victim alleges Behrens "approached and touched her in the church's kitchenette area and then went onto to reach under her shirt and touch her breasts."

Court documents go on to reveal Behrens admitted to hugging and kissing the victim several times over a nearly two year period since the fall of 2012.

In an email detailed in the probable cause document, said to have been exchanged between Behrens and the vicitm, Behrens wrote "we had gotten too close and some inappropriate things happened." He also said he had met the victim at a school three or four times to talk.

Behrens was arrested Sept. 19, documents show he turned himself into Grandville police. He was arraigned in 59th District Court in Grandville on Monday and is due back in court on Oct. 6 for his preliminary exam.

Behrens is currently free on bond.

A staff member at Grandville Baptist Church declined to comment to FOX 17 on Tuesday, instead referring us to a spokesperson for the church. FOX 17 has left several messages for that spokesperson but has yet to hear back.

FOX 17 also went to the listed home address for Jeremiah Behrens to seek comment, but no one answered the door.

Anyone with any further information on the matter is asked to call Grandville police and Det. Darin Rietman at 616-538-3002 ext. 740.