“He will always be in our hearts”: Community remembers Baby Benjamin through bone marrow drive 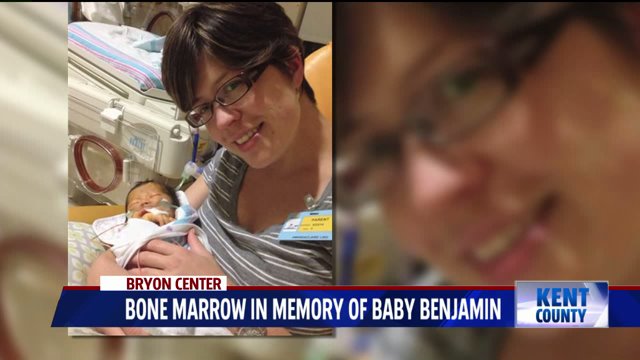 BYRON CENTER, Mich. – A community is paying it forward by holding a bone marrow registry drive at Countryside Elementary School after losing a sweet little boy known as “Baby Benjamin.”

“It has been a very emotional day, because it just shows how awesome this community is, and how much Mandy and Tim are loved,” said Jolynne Dobson, Countryside Elementary School principal.

On Monday night, Baby Ben’s mom and dad wrote this letter on their son’s care page:

“Brave Benjamin earned his angel wings and passed away to heaven peacefully in his mommy's arms on October 6, 2014. He touched so many lives during his 6.5 weeks with us... doctors, nurses, friends, family, and people who never met him, but were inspired by his story to join the bone marrow donor registry. We truly hope that at least one of you will be a match and save a life. Benjamin's doctors confirmed that he had a match, but his HLH took too great of a toll on his organs.

We are thankful for the time that we had with Benjamin, the love that he shared with us, and find peace that he is with God watching over us. He will always be in our hearts.

Thank you again for all of your prayers and support.

BAby Benjamin's legacy will live on when others join the bone marrow registry.

“When Mandy sent me a text last night and let me know that Ben had passed away, her second text was, ‘Tim and I still want the bone marrow drive to go on,’” said Dobson. “There might be someone who comes tonight who wasn’t going to come, but because Ben passed away they’ll be here, and that might be the person who saves someone’s life.”

Benjamin’s mother Mandy is a long-time fourth grade teacher at Countryside Elementary. On Tuesday the school held a drive with the national bone marrow program, “Be the Match.”

“They were saying too, at the bone marrow registry, that they had phones ringing off the hook. They had never seen such a huge response to a bone marrow drive as this one,” said Dobson, a drive that Dobson said had been planned only a week earlier, planned separately by another teacher and parent.

Countryside Elementary students walked into school Tuesday wearing hats in Baby Ben’s honor and holding up the number of fingers showing how many dollars they donated to the bone marrow registry.

“I hope hundreds and hundreds of people are touched by this, and that there are hundreds of lives saved,” said Dobson. “Someday I hope we hear stories about someone who found their match through this event, and that we can share that story with Mandy. That will be Ben’s legacy: his short life wasn’t a mistake, wasn’t an accident, that there was a divine purpose in that, and lives will be saved because of it.”

As of Tuesday, Byron Center Public Schools, including Countryside Elementary, raised more than $5,000 on behalf of Baby Ben's bone marrow registry drive. This will go towards paying the registration fees for those who signed up with Be the Match on Tuesday.

On Monday, Oct. 20, there will be a second event in honor of Baby Benjamin at Big Bob's Pizza, located at 661 Croswell Avenue SE in Grand Rapids, from 4 p.m. through 8 p.m. Big Bob's Pizza will donate a portion of the night's sales to Be the Match. Funds will be used to help cover the $100 cost of typing the cheek swab sample from new registry members.

Be the Match officials said it is difficult finding a bone marrow match across some 11 million donors on the registry. Officials said they are essentially looking for a white blood cell match. If a match is found, officials said, a person can donate many times non-surgically, as well as surgically, based on the patient's need.