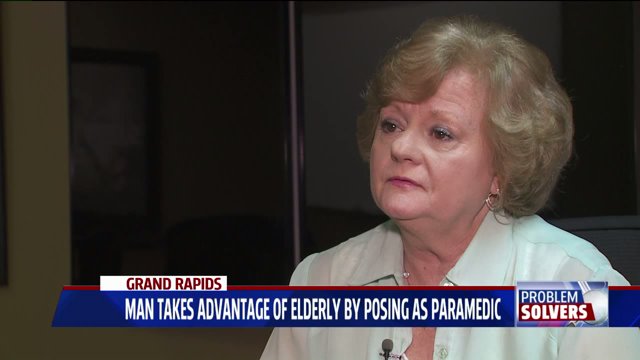 GRAND RAPIDS, Mich. -- Mary Rademacher helped police catch a  homeless man who allegedly moved into her aunt's apartment at an independent living facility and stole from her.

"It happens to other people. You read about it in the newspaper. It doesn't happen to you, and who does this to elderly people?" Mary Rademacher questioned.

Rademacher said her 84-year-old aunt suffers from dementia, and for the past 6 years her aunt has lived in Grandview Apartments in Grand Rapids. It's an independent living facility on Bridge Street near Covell.

"Thursday night... I called her and found out her phone was changed. Her phone number was changed which I thought was very odd," Rademacher said.

Rademacher said she then called her aunt's cell phone a couple of times.

"He said, 'I'm Phil, and I'm a paramedic and your aunt fell a couple days ago, and I'm just here checking on her,'" Rademacher recalled her conversation with the man.

Rademacher talked to her aunt, who said everything was fine.

"She mentioned that he'd been sleeping on the Lazy Boy chair for the last five days, and that he's been a perfect gentleman," Rademacher said.  That's when she said a red flag went up.

Phil turned out to be Phuc Pham, a homeless man who gained access to the building and gained her aunt's trust.

"In that short time that he was at my aunt's, he tried to open up a credit card for her. He went to Comcast and ordered... Playboy Channel, HBO, all those channels," Rademacher explained.

She added, "He went to AT&T and ordered internet service and WiFi. She doesn't even know computers, how to do it."

Saturday, Rademacher said she set up a sting. She called Grand Rapids Police when Pham showed up to her aunt's apartment.

FOX 17 did some checking into Pham's criminal history. He has numerous fraud related convictions dating back to 1992.

"This isn't a matter of two people building a friendship. This is an individual who's obviously managed to nestle himself into her life and then has leveraged that relationship into getting money," Merrill said.

Having been caught in the act, police charged Pham with "embezzlement from a vulnerable adult." However, this may only be the beginning.

"We have several other older residents and things were underway there which is why I say other charges my be forthcoming," Merrill said.

"It's great the police department got involved, and we got a handle on it and charges have been filed and somebody's been arrested, that's great.  But the most important part is that family was paying attention to what's going on with their loved one," Merrill said.

He added, "They were involved with their lives. When they saw something that didn't sound right, they took action."

Rademacher said, "And as strange as it seems, both these women, when they knew all this information, with all the police activity and everything, still say, 'but he was such a nice man, he's such a nice man, he was so good to me. He never hurt me,' and I have to tell them, 'Yes he did hurt you.'"

"They're independent living. They have to fend for themselves, and I want people to know that if you have your loved ones in one of these places, you need to look out for them," Rademacher said.

Rademacher said Pham also showed her aunt a gun that looked like a .45. It was apparently a BB gun.

Police said Pham stole more than $200 from the victim in this case, not including the other alleged activities.

We learned Pham may have been doing the same thing to another resident, a 90 year old woman, for a year or so. Those charges are pending.

FOX 17 reached out to management at the building and was told the person we needed to speak with is on vacation.

Rademacher said she was told by apartment management that they aren't responsible for monitoring who comes in and goes out of the building.

Rademacher expressed her gratitude to the Grand Rapids Police Department and for the detective on this case.