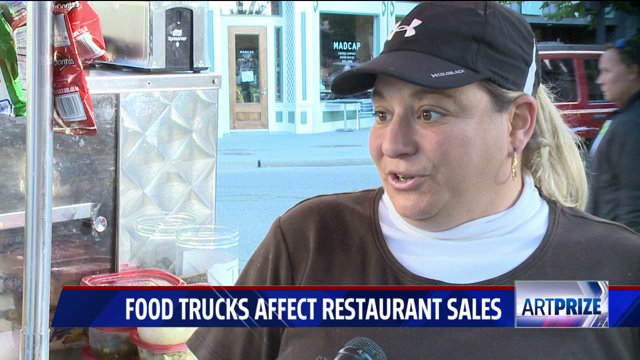 Vendors say it’s because of the number of food trucks that are now part of the large event.

Jennifer Idema, owner of Coney Girl, a hotdog cart located at Monroe Center and Ottawa Avenue, said over 15 years of operation the biggest boost in sales comes during ArtPrize since it began in 2009.

While the foot traffic grew over the years for the event, Idema said the presence of food trucks also got bigger, which made her profits smaller.

Still, Idema has a lot of pride in her product. She said the reason her coney dogs are such a hit is her father's secret recipe.

"My mom doesn't even know [the recipe]. Neither does my husband," Idema said.

Her recipe won her the honor of being named best hot dog.

Idema said her parents have owned a Coney Island on the east side of the state for 45 years. She said when she moved to Grand Rapids, she couldn't find a good hot dog. That's when she decided to take her recipe to the street.

The restaurants on wheels now seen on nearly every street during ArtPrize is something Idema said cut her profits by three-quarters when compared to the previous year.

Grinwis said his sales are down by about half from ArtPrize 2013. Still, he said, hanging out with his cart, which is parked next to Coney Girl, continues to be worth his while.

Idema said she understands the hard work that goes into running a small business and that she has no ill will against her competitors.

"I'm a small business, so I completely support it," she said. "But, can't go to Disneyland this year, guys."