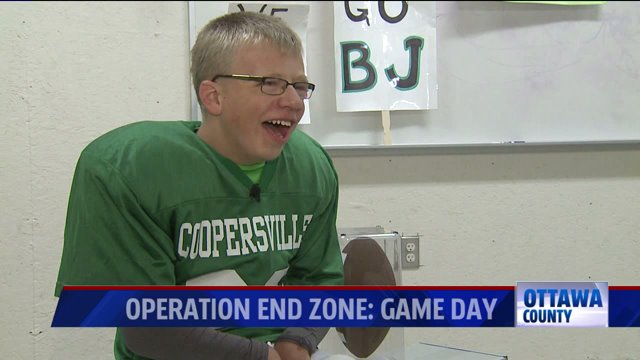 BJ Young of Coopersville gets to suit up, fullfill a dream, and make the play of a lifetime.

COOPERSVILLE, Mich. — At 13 years old, BJ Young has spent his life on the sidelines because of a rare debilitating medical condition.

FOX 17 first introduced viewers to BJ and his family on Friday.

"There were many a nights Amy (BJ's mother) and I just sat there and we had been told he wasn’t going to walk, talk, live past one," said Duane Young, BJ's father.

At 13, BJ continues to beat the odds and Saturday marked another major milestone. He was given the opportunity to suit up in a Broncos uniform and play during a Rocket Football game at Coopersville High School.

“I didn’t know what to think," Duane Young said. "I really just don’t know, I’m still soaking this all in,"

The plan for Saturday, dubbed “Operation End Zone” was orchestrated to give BJ a chance to do something he's always wanted, alongside his friends and classmates. Cooperville's recreation director along with coaches from the city's recreation department were behind the idea.

“To be able to be on the field with kids he goes to school with, and that he can high-five on Monday,  things like that I think is just awesome, just a spectacular moment," Amy Young said.

"This kid has touched so many lives, we’ve had so many lives who have touched ours and it’s from all those prayers, all the hope from everyone and that’s what means the most to us."