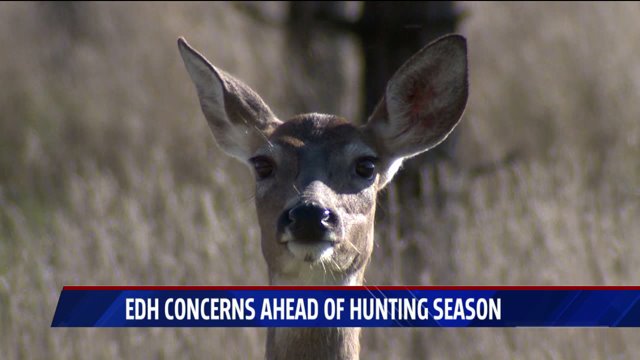 GRAND RAPIDS, Mich. – Deer numbers are making a comeback after some herds were taken out by epizootic hemorrhagic disease (EHD) two years ago, according to state Department of Natural Resources (DNR) officials.

“EHD was not a problem this year” said Russ Mason, Chief of Michigan DNR Wildlife Division. "We didn’t have any cases. There might have been one."

According to the DNR, EHD is marked by extensive hemorrhaging in white tailed deer.

“We’re seeing deer come back in those areas, and the reports that I’ve been getting from bow hunters are that deer hunting is recovering even in areas that were hard hit by EHD,” said Mason. “Strangely enough, they’re seeing bigger bucks than they might have seen otherwise.”

“The bigger concern for me is that while we lose one to two percent of our deer hunters every year because of those aging effects, we’ve lost 50 percent of our small game hunters in the last 12 years,” said Mason.

“Small game hunting, as far as I’m concerned, is a whole lot more fun when it comes to taking kids. And frankly, it’s something that you can do from September 15 all the way through March if you go out and chase squirrels like my kids and I do.”

Changes to keep in mind this year are the price increases and the way to purchase hunting licenses.

Now hunters will first buy a base license and then buy a single or combination deer license.

“Of course, we’ve got our license increase, that’s been great for us,” said Mason. “First off, it’s strengthened the conservation community: 50 percent of the funds go back out to the community, so this year the wildlife division alone put $1 million back out to partners.”

Mason said the westernmost area of the Upper Peninsula may see fewer deer due to snow and high numbers of predators, such as coyotes.