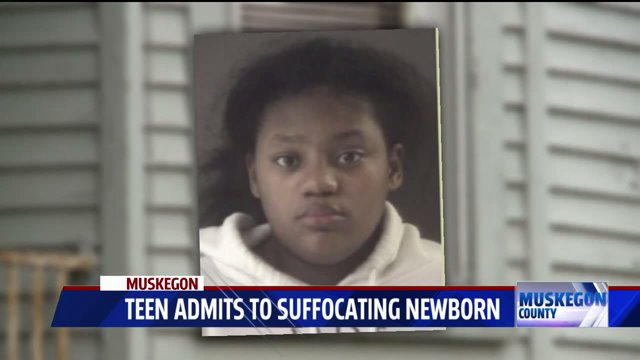 17-year-old Jessica Brewster is accused of killing her newborn infant and then burying it back in October.

MUSKEGON, Mich. — Jessica Lynn Brewster, 17, was formally charged and arraigned in a Muskegon County courtroom Wednesday morning on an open murder charge in the death of her newborn daughter. The judge denied her bond.

In a sworn affidavit statement submitted to the court, Muskegon Police Detective Kory Luker details an interview with Brewster following the discovery of her dead newborn where she admitted to giving birth to the child on Oct. 15.

The birth happened around 4 a.m. in the bathroom of her mother's home in the 1400 block of 5th Street in Muskegon, according to the sworn statement. Brewster then proceeded to cover the baby's face with a towel as it began to cry fearing she heard someone walking down the hallway toward the bathroom.

Brewster told police she covered the baby's face for a short time until the baby was dead, watching the its hand open and close.

The baby girl's body would later be discovered by employees of the complex on Nov. 10. Police took Brewster into custody later that evening.

“It’s certainly a very tragic situation and one that nobody ever wants to have to investigate or deal with but unfortunately we are dealing with it right now," Muskegon County Prosecutor DJ Hilson told reporters Wednesday afternoon.

“These cases are never easy, it’s tragic and if we can take a silver living from all of this its educating the rest of the community that the (Safe Haven) law does exist and we believe in it and we’d like if people get themselves in that situation to take advantage of that."

Hilson made a point to once again highlight the state's "Safe Haven" law as an available alternative to avert a similar tragedy. The law allows parents to drop off a newborn up to three days old at any police, fire station or hospital, no questions asked.

“Certainly this is something we don’t deal with on a regular basis but I want the public to recognize there is that out there as opposed to go to this drastic measure," he said.

Brewster is a senior at Muskegon High School, John Felske the district superintendent confirmed Tuesday. Felske said the school would be bringing in counselors and briefing staff on the situation.