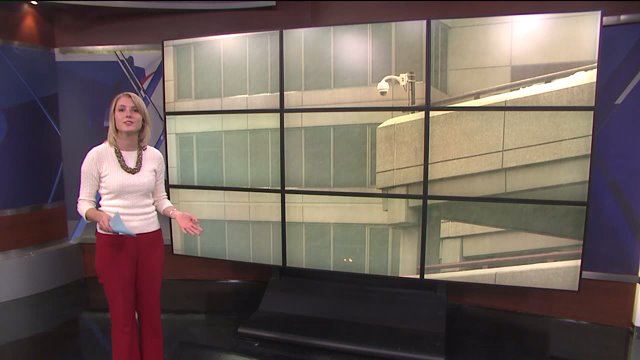 GRAND RAPIDS, Mich. – The number of surveillance cameras in Grand Rapids within the last decade appears to have exploded, according to an updated map posted by an independent blogging group.

The Grand Rapids Camera Map group pinpointed hundreds of surveillance cameras throughout downtown Grand Rapids on their blog earlier this year.  Although the blog states there may be errors, this updated map shows dozens more cameras than a similar map of the city created by another group in 2004; that map recorded 162 cameras.

“The surveillance camera state is growing really without any moderation or anybody controlling it, and that’s what’s beginning to really worry the average citizen,” said Bill Brown, co-founder of the group Surveillance Camera Players (SCP). “It’s really kind of a secret in broad daylight, a public secret, why should it be so secret? It doesn’t seem to be accomplishing its mission but defeating it.”

Grand Rapids Camera Map said Brown and the SCP are their motivation to map the city’s cameras. For the past 18 years, Brown says the SCP has been working to inform the public about the government, like where surveillance cameras are, in order to make informed decisions.

Brown believes camera installment should be more transparent, listed on a registry, and voted on by citizens.

“At some point people have got to say, ‘okay, I’m aware of all these different developments and I think it’s about time that we actually had a vote. Do we need to have regulations in Grand Rapids about the installation of new cameras?’”

Grand Rapids Police Lieutenant Pat Merrill reviewed the maps and could not confirm if all cameras are legitimate, but said the majority of these cameras are private.

“This is something we are doing to each other; it’s not something being done to us by government,” said Merrill. “That’s a big important difference: Big Brother coming and putting a camera up on you, than your neighbor choosing to erect a camera on their own property.”

Although Merrill said detectives will seek out video during investigations, he said the one dome camera at Pekich Park at Cherry Street and South Division is the only camera installed and monitored by GRPD. Over the past few years, Merrill said the amount of crime at Pekich has dwindled.

“We have little interest in monitoring the city of Grand Rapids’ people and their comings and goings via video, no interest in that,” said Merrill. “But we have trouble spots. What we want is the ability to be able to erect something like that, monitor it while the trouble is still active, and then when the trouble goes away, we can pull the video and move on.”

Yet walking downtown, many of these cameras are visible only to the trained eye. It’s something several residents told FOX 17 they wish they knew more about, because they feel safer knowing where cameras are.

“I think it would be nice if the city would do something like that and let us know, just so that we do know, and know where they’re at, and maybe suggest if we feel there could be one somewhere else,” said Karrie Thompson, Grand Rapids resident.

Merrill said mapping all of the active surveillance cameras in Grand Rapids is a “huge task,” and said GRPD has thought of doing this.

He reiterated that video is an important investigative tool, but is one piece of the puzzle and clearly important to analyze within its context. This leads to the issue of privacy that is prominent among local police department discussions of whether or not to adopt body cameras.