Cornerstone men’s basketball’s past is leading the present 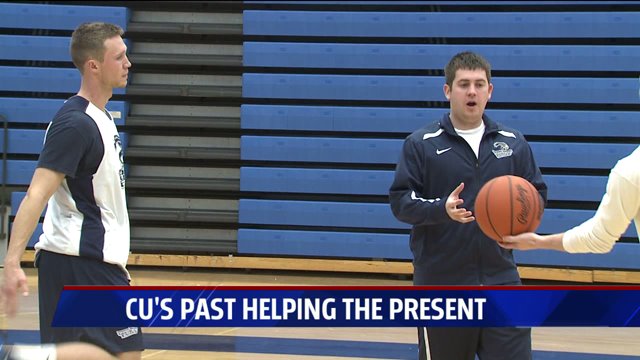 GRAND RAPIDS, Mich. -- At Cornerstone University, the men's basketball program has turned to its past to lead its present.

For the past seven years, the Golden Eagles have run a mentoring program that has set up alumni as individual prayer sponsors for the current team members. It was a program started by former player and assistant coach Lance Roark, who started off by turning to former teammates.

"So he kind of put his arms around us and said, 'Hey, this is kind of my thought. This is what I'd like to do," said Cameron Currie who played for the Golden Eagles from 1993-1997. "You've been out of school a couple years. Can you just keep it simple; meet up with a guy and make a friend?"

"He just helps talk through things that if I don't want to talk to my parents about I can talk to him," said Pepper. "He's older. He's grown up. So it's just nice to be able to talk about future."

Assistant coach Dom Allen has seen both sides of the program, first as a player and now as senior guard Ty Mason's prayer sponsor.

"As it gets going and you kind of build a relationship together," said Allen. "You don't even really think of its as a prayer sponsor-type thing. It's more of a friend."

"We've really grown to have a good relationship," said Mason. "I've been able to ask him about a lot of different things, life advice and spiritual advice. He's really been there for me these four years."

Assistant Coach Eric Desantis oversees the program now and tries to find some sort of connection between player and prayer sponsor. It could be that they went to the same high school, shared the same major or played the same position.

"I wish this was going on while I was in college," added Currie. So for me, I think that was one thing that grabbed me was I wish I had someone that was a little bit older - or a quite a bit older now - that was maybe one or two steps ahead of me and you can bounce a life question, a business question, a spiritual question or a basketball question off of."