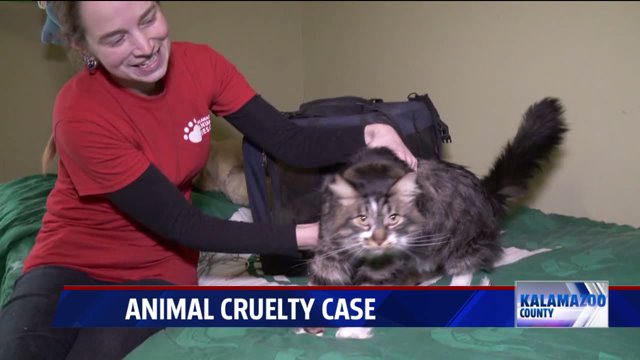 KALAMAZOO, Mich. – An animal cruelty case is expected to begin trial Jan. 13, 2015 at Kalamazoo District Court after a cat was allegedly beaten and found unresponsive outdoors.

Stara is a 16-pound cat who was rescued, de-clawed, and bottle-fed at the Kalamazoo Animal Rescue since she was one-week-old. A family first adopted the cat, naming her Daisy. Then this fall, the family was moving and gave Daisy to the family of an acquaintance, Allyson Mathews.

Kalamazoo Animal Rescue volunteer Adrianna Stiemsma told FOX 17 she found a cat, now named Stara, stuffed into a small crate Oct. 6 about one foot from the curb on Forbes Street near Douglas Avenue. However, Mathews, the alleged abuser, said she worked to try and give Stara a good home.

“When I lifted (the crate), it was heavy, so my first thought was, ‘please be alive,’ said Stiemsma. “I opened it up: she was just crammed in there, not making a noise, wrapped in a blanket, she was covered in feces, the white of her mane was all covered in blood, her eyes were swollen, the one was bloodshot. She was scared.”

According to court documents, Mathews is charged with one count of misdemeanor animal abuse and neglect. Several KAR volunteers believe Mathews beat Stara senseless with a broom, and left her outside at least an hour and a half for dead.

Mathews said she took the cat and its brother in when their original owners were looking for a new home. Mathews told FOX17 the cats were skittish, and when Stara bit her, Mathews hit the cat with a broom to protect her young children playing nearby.

“It just kind of flipped out and just started like cats do, screaming I guess, you could tell it was very mad,” said Mathews. “I was concerned for my kids. So I smacked it with the broom; that’s when it stopped moving and I put it in the cat cage, and I frantically called my father.”

Mathews said within six minutes someone had picked up the cat and carrier; Stara was gone.

Since then, several people have written letters to Kalamazoo District Court asking for harsh punishment against Mathews.

Mathews said she grew up with animals, has volunteered at shelters, and is not an animal abuser.

“I just hope that people realize that there is animal cruelty out there and there are people out there that need to be punished, but I am not one of them,” said Mathews. “I am a kind person, I’m a kind mother, I’m a good wife, I don’t think that other people see that.”

Trial was initially set for Tuesday but was adjourned until Jan. 13, 2015.