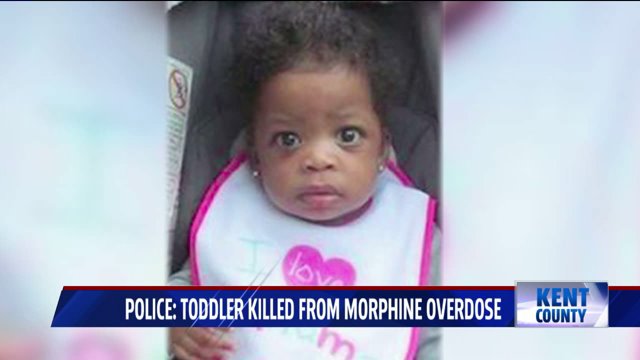 The Kentwood Police Department is calling the death a homicide.

According to court documents, both of Ja'Ziah Mai'Lia Beeks' parents deny giving their child the morphine.

Officials say her mother had a prescription for morphine sulfide tablets, and she told investigators that when the father arrived the night of April 4 she left to go to a TGI Friday's.

She arrived back at about midnight, and then at roughly 1 a.m. April 5 Beeks' father left, according to court documents.   Investigators say he denied knowing the tablets were in the house.

Police were dispatched to Castle Bluff Apartments April 5 and found the infant unresponsive.  She was pronounced dead at a Grand Rapids hospital shortly after.

Following the medical examiner's discovery of morphine in Beeks' system, police executed a search warrant April 29 and located the prescription.

Her death has been ruled a homicide, but neither of her parents have been charged.