Governor: Voters must approve road funding deal in May election 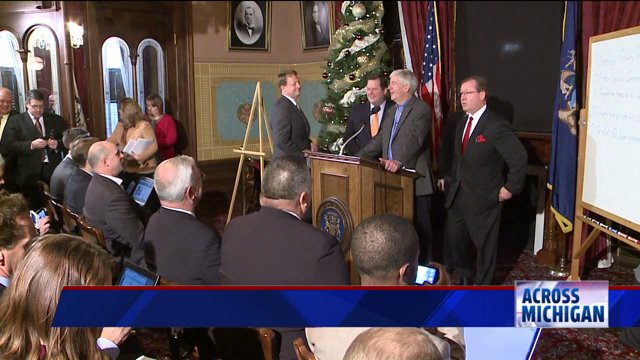 LANSING, Mich. -- Governor Rick Snyder and party leaders from the house and senate reached an agreement on how to fund Michigan's roads, Thursday morning.

It took several meetings to come to a compromise.

However, voters must sign off on the deal on the May election ballot. Snyder said that's part of the plan.

Tonight, the house and senate must pass legislation to send the proposal to the ballot.

"It would raise the [retail] sales tax... and use tax to 7% from 6%. It would eliminate the sales tax on motor fuels. So with respect to the current 6% you see on motor fuels, that would disappear," he explained.

The sales tax increase and other changes will raise $1.3 billion in state revenue. Of that amount, Snyder said $1.2 billion will go to roads. Public transportation will receive $100 million.

Local governments will also get about $100 million. Public schools will get an extra $300 million. Lawmakers are restoring the “earned income tax credit” (EITC) for low income citizens. That’s $260 million.

“There’s a big 'if' here, and that’s if the ballot initiative passes,"Gretchen Whitmer, the senate democratic leader said.

"I don’t want to even think about if it doesn’t. We all have a vested interest in making sure that this happens now," she added.

Scott Hagerstrom, state director of Americans for Prosperity of Michigan said, “This is the wrong way to go. It seems like all Lansing knows how to do is grow government [and] take more money from the working people of Michigan.”

He said he disagrees with the tax increase and higher vehicle registration fees. Hagerstrom said lawmakers need to do a better job of prioritizing spending.