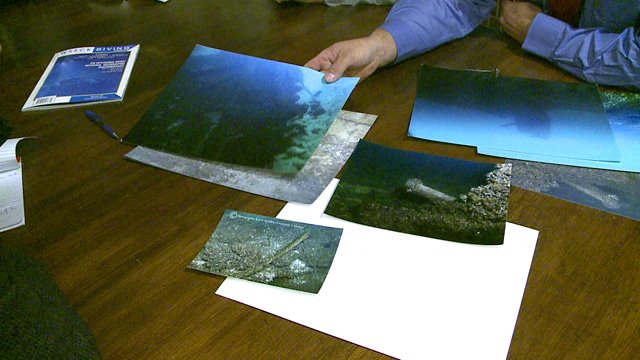 MICHIGAN -- Le Griffon, a well known ship that sunk in Lake Michigan during the 17th century, has been hiding at the depths of the lake for more than 300 years. Now, treasure hunters who believe they found it, said to have stumbled upon it by accident.

The Griffon was the first ship ever to sail the Great Lakes, originally built to haul furs from the Green Bay area to Detroit.

Joe Porter, publisher for Wreck Diving Magazine, has penned articles on famous ship wrecks including the Titanic, but said the Griffon is the most fascinating.

"When the Griffin left from Wisconsin, headed back to Niagara, it was never heard from again," Porter said.

More than 5,000 ship wrecks are scattered throughout the Great Lakes, and Porter said the Le Griffon is the most precious one.

Originally searching for lost gold, Kevin Dykstra and Frederick Monroe believe to have found what more than 20 explorers

claim to be the first shipwreck ever to sail Lake Michigan.

"We like to turn the sonar on and just go to places that we haven't been before, and just try and see what we can find down there," Dykstra said.

The two treasure hunters were taking measurements of the ship when Dykstra's magnet, tethered to his scuba gear, picked up an object that few people have ever seen: a hand forged nail that dates back to 1679.

The nail, which has since been observed by historians, is believed to have been on the ship at the time of it's disappearance, being hauled for building purposes.

It's the only artifact so far to be brought back from the ship wreck. Many explorers have claimed to have found Le Griffon in the past, but Dykstra and Monroe are the only ones who've found an actual ship wreck.

Pictures show the bow of the ship with a carved sculpture. They believe the carving is of a mythical creature known as a griffon, half lion and half eagle.

"If you take the picture of the carving of the griffon and overlay it on what these gentleman have, it's very compelling," Porter said. "It's the holy grail of shipwrecks in the Great Lakes."

Dykstra said he took photos of old cannons, a sword, and the griffin sculpture, evidence he says reveals the wreck and its

However, Dykstra said they've been advised to not disclose where they found the wreck in order to help preserve what's left of the ship.

"The Great Lakes are a time capsule, the fresh water preserves the ship wreck," Porter said.