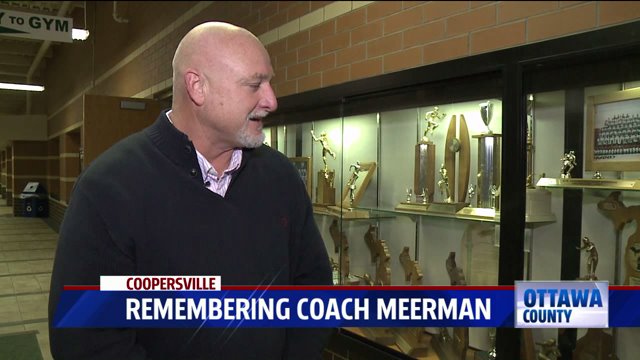 COOPERSVILLE, Mich.-- The Coopersville community is mourning the loss of a former football coach who touched lives of many students, family, and friends on and off the field for more than 30 years.

“We could sit down and talk football for five hours,” said an emotional Todd Vanhouten, as he tried to fight back tears.

Jim Meerman holds the record for most wins at Coopersville High School, and a Michigan Hall of Fame inductee who passed away today after a battle with kidney cancer. The people who knew him best share why he's shaped Coopersville sports forever.

Jim Meerman, was the head coach at Coopersville for 25 years, but coached there for 30 years total.   He won more than 200 games.

Todd Vanhouten stood by his side on the sidelines for every single one of the wins and losses. The coaching tandem spent time on and off the field together since 1985.

“We were best friend,” cried Vanhouten.

Todd Vanhouten says he received a call from Meerman’s family saying Jim had passed away. The first year they coached together at Coopersville High School they won a conference championship.

“It was the start of great things here at Coopersville we were real proud of that,” said Vanhouten.

Vanhouten says he would describe their relationship as a modern day Woody and Bo, except they played for the same team.

“He fired me many times for sure, and I quit many times. Until Sunday came around, and we came back, and work together again,” said Vanhouten.

Vanhouten says there's no doubt Jim was a master when it came to coaching a team, but he did much more than that.

“Jim was a father figure. He was quiet and when Jim spoke everyone listened including me,” he said.

Meerman hit home the importance of playing with passion, but not just in a football game, but in life. Meerman acted as the dean of students for the high school at one point. Also, he ran the nonschool-funded middle school program, as well as the town's rocket football program with volunteer coaches.

“He loved kids and that's who he is,” said Superintendent Ron Veldman.

Vanhouten and Meerman stepped down from coaching in 2010.

“I always hoped the band would get back together. It reminds me of the Beatles. For me it's like the reality is it’s not going to happen.

Maybe not in this lifetime, but his memory on and off the field will be carried on by all the people who loved him, but Vanhouten already let him know he wants him to start getting a team together.

“I was like 'hey' let me be the defensive coordinator, save the position for me, and I’ll coach with you',” he said.

Meerman leaves behind four children and his wife.