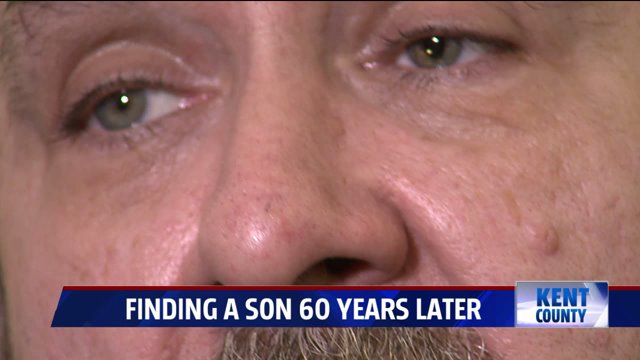 The man had tried having kids all his life, but thought it was a life goal he never accomplished.

"He's my full son that I've had my whole life, but why my wife hid that letter is beyond me."

A letter was sent by the child's mother more than 50 years ago that told him of his then 5-year-old son. That man is now 61-years-old.

It was a message believed to have been hidden by his wife for decades.

Tony Trapani, 81, said that after his wife passed away, he was cleaning out one of her old filing cabinets when he came across the letter.

Father and son only met for the first time Sunday, and Trapani said he feels like a new dad.

Samuel Childress was finally able to meet his father for the first time.

Childress said that his mother told him that she had sent the letter, but figured his father was ignoring him.

Trapani claims that his wife at the time intercepted the letter and hid it in a filing cabinet for decades while the couple couldn't conceive a child on their own.

"Why my wife didn't tell me," said Trapani. "I don't know. She wanted children. She couldn't have any. She tried and tried."

"He's my full son that I've had my whole life, but why my wife hid that letter is beyond me."

Childress said that while growing up, it was his understanding that his father got the letter, but didn't want anything to do with him. He grew up in Pennsylvania, and meeting his father was just a distant thought.

"Just to know him now is so important to me. It's going to fill that void," he said.

Father and son are now catching up on a lifetime of memories, making the most out of the time they have left, knowing they can't go back in time or dwell on the secret that kept them apart for so long.

The family is also planning to have a paternity test done just to be 100 percent sure.