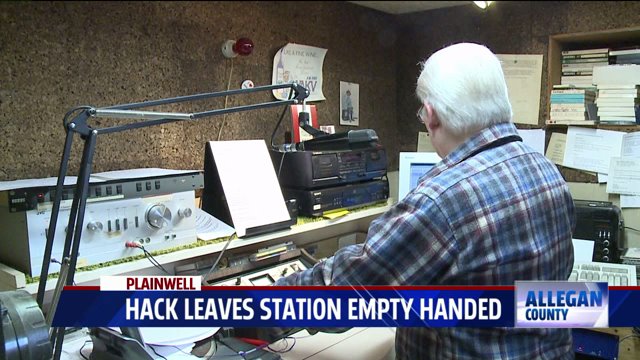 PLAINWELL, Mich.-- A radio station in Plainwell has lost its music library in a ransomware attack.

The hack happened to WAKV on Jan. 9.

Jim Higgs, owner of the station, has been a radio host for more than 50 years. For decades, he's operated WAKV out of his basement. But two weeks ago, he noticed something he hadn't heard before: silence.

"The radio wasn't playing anything. "Well that right off the bat is a hint there's something wrong," Higgs said. "Then I looked at this computer, and there were two icons on the desk. Basically, it was, 'We have your files. If you want them unlocked, go to this website and pay us $500.'"

Higgs deleted the message but the damage was already done.

"All the commercials, all the public service announcements and our archives --everything that we have done since 1995, it's all gone."

The attack encrypted all the data. Luckily, the music was backed up on a different computer. As for everything else, Higgs has and will be spending several days redoing hours of work.

"I was angry. I mean, obviously you've been invaded."

Since there's now way of knowing who the hackers are and where they came from, Higgs has only one message.

"The big lesson here is to make sure you back up everything, not just a few things."