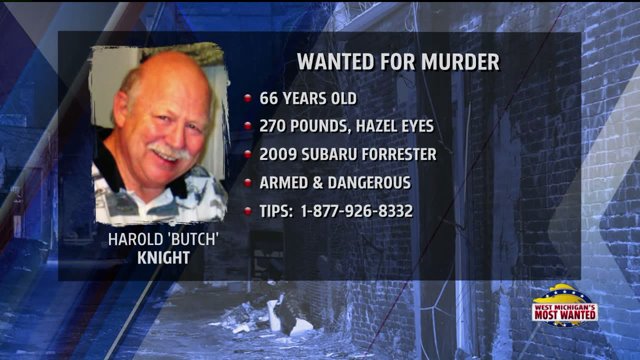 ALLEGAN COUNTY, Mich. -- A suspected killer -- who police say confessed to murdering his own wife on a 911 call -- has been on the run for more than two weeks now.

As the search for Butch Knight expands nationwide, new details are emerging about his relationship with the woman he's accused of murdering -- and a relative of the victim has hints at what may have gone wrong.

But that’s exactly what Harold Knight -- known as "Butch" -- is accused of doing after his wife Sara was found murdered on January 13th in their Ganges Township home.
In a 911 call, authorities say Butch told them he had harmed a woman in his house and that he was leaving the country.

“He purchased a gun within a short time-frame from the murder -- within a few days,” Hetherington says.

“I never suspected him at all,” she says.

But that’s not to say she liked Butch either.

“We just always blamed it to be a really grumpy old man,” Harris says. “He wasn’t like personable and he was really into my mom so we just let things go.”

Their 18-year age difference was the only thing she found strange. Sara, a respiratory therapist, had met Butch in 1996 while caring for his parents.

“I have love letters from the two of them and he called her "hunny bunny" and he was always there for my mom, so we didn’t think anything of it,” Harris said.

But as time passes and the hunt for Butch continues, new things that may have seemed small at first are turning into big questions.

“She says that he was acting strange and she confronted him,” Harris says. “Because he was taking the car and disappearing and he had done some strange things that week and he goes, 'Well, our anniversary is coming up so if I tell you what I’m doing it’s going to ruin the anniversary,' so she dropped it and let it go.”

Harris said Butch, a former truck driver, didn’t work -- but pressured her mother into working more and more for years.

“She just said that he was being kind of mean to her about her not making enough money,” she says.

New evidence Harris says she has found leads her to believe Butch had a motive.

“She was planning on leaving him, but she never burdened us with it so I can’t confirm or deny," she says, "but it seems like Mom had an account that he didn’t know about and she was making arrangements to possibly leave him, but we don’t know why."

The U.S. Marshals work around the clock to find Butch, who was last spotted more than a week ago in Maine -- where he and Sara lived for several years.

“We really don’t know why he went back or what he’s doing, what his end game is going to be here,” Hetherington says. “If he’s trying to be a fugitive for a while and just live on the lam -- or if he has some goals or something he wants to do before he turns himself in.”

The Marshals say Sara’s mother received a package from Butch after her murder. Roxanne says she immediately called 911 when she realized who it was from.

“We could tell where it came from so we interviewed where the package was sent from and basically just haven’t gained any more information,” Hetherington said.

While authorities remain tight-lipped on its contents, they’re not ruling out any possibilities of his whereabouts.

“We know some of his family was from Ontario originally. His grandfather was from Canada, so there is a chance,” he says.

They say Butch has a medical condition that requires him to eat healthy. He's had a pilot’s license and has IT training.

It only takes the right tip and the Marshals can track him down.

“We have assistance basically anywhere in the country,” Hetherington says.

Meanwhile, Sara’s family lives in fear coping with such a traumatic loss.

“Mom was just the type that took care of everything. She was like everybody’s rock,” Harris says. “We’re just lost without her. We’re completely lost.”

Harold 'Butch' Knight is 66 years old, 6’4”, and 270 pounds with hazel eyes.
He may be driving his wife's 2009 light green Subaru Forester with Michigan license plate GM74A.