A savior in the sawdust? Carver sees likeness of Christ in new work 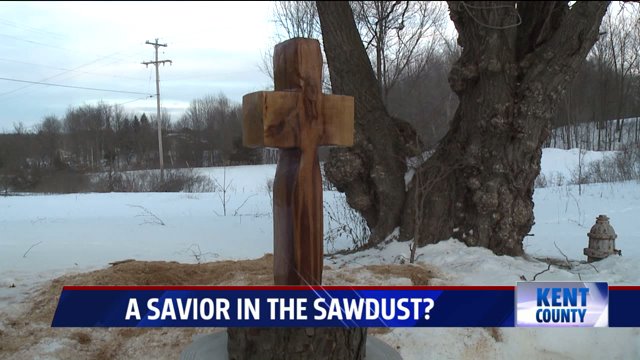 COMSTOCK PARK, Mich. -- A local chainsaw carver says he's received "a message from above," seeing Jesus Christ in his carving of a cross.
Jake Klumpp makes all sorts of chainsaw carvings at his Comstock Park home, but what he decided to make for a friend last week stopped him in his tracks -- with what he calls a little "divine intervention."
“When I’m running my chainsaw it does kind of get me at peace,” he says.
It’s a hobby that leaves the 30 year old's driveway filled with sawdust, emptying his mind of his daily worries.
He creates chainsaw carvings from any scrap wood he can get his hands on, but his most recent creation of a cross for a friend did more than just clear his mind.
“When I realized what it was I got quite a sensation inside,” Klumpp said.
His brother noticed it first.
“My brother said it was an image of Jesus on the cross,” he says.
The image is ingrained right in the wood.
“I’m not an everyday churchgoer or worshiper, but I do believe in the Lord,” he says. “It’s just a once-in-a-lifetime thing that can never be duplicated or done again.”
A spiritual experience for the woodworker, who says this is a wake-up call.
“There are times in my life when it gets difficult and lately it has been,” he says. “When I seen this image come out, it just kind of said to me the Lord is trying to show He`s there, not to give up on Him.”
An inspiration to pay it forward, Jake donated a cross the next day to the family of Kent County Sheriff’s Deputy Paul Barquist, who had recently passed away.
“I put the Kent County Sheriff’s Department across it and it had his badge number on it and they had it at his funeral,” he says.
And though others may see something different -- or not see anything at all in the small wooden cross -- Klumpp says its message to him is crystal clear.

“When I saw this, it`s a sign that the Lord’s saying, 'Hey I’m here if you need me.'”​
Although he says he’s attached to the cross and it does have sentimental value, Klumpp does have the cross for sale on eBay.