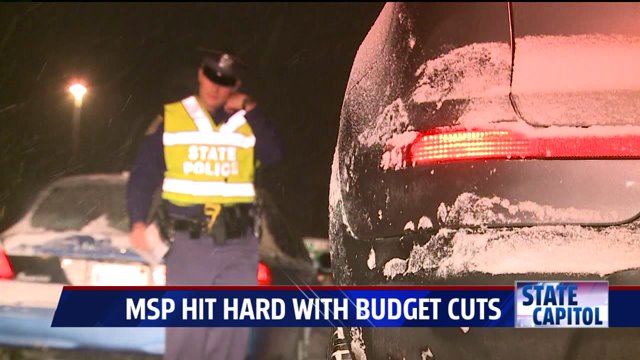 ROCKFORD, Mich. – In preparation for the 2016 fiscal year, Wednesday Governor Rick Snyder proposed where he plans to cut government spending this year. Of the $207 million in cuts, the largest portion comes out of the Michigan State Police at $23.3 million.

While $23.3 million may sound alarming, the good news is that it does not mean any layoffs for MSP. Captain David Roesler, MSP district commander for the Rockford Post, says MSP are “in pretty good shape.”

“It slows us down a little bit in getting some recruits and new employees, trying to get our numbers back up to where they were; but it didn’t result in anybody being laid off at all,” said Roesler.

The majority of the funds are coming out of behind-the-scenes programs: $16 million proposed to be cut from the MSP Disaster Assistance Program. That is money Roesler said is left over from the state’s funds to clean up the flooding on the east side of the state.

But where these cuts are more visible is in recruitment.

Instead of a hoped-for 85 graduates from trooper recruit school, this year’s number has been dropped to 60 and starts a month later on March 1. Additionally, the motor carrier officer school was cancelled completely.

Roesler said this hurts growth this year as troopers retire; but growth is not stunted to what he called “heartache” numbers.

“We don’t get any new people as quickly as we’d like, but that’s always the case, I mean it’s never quick enough,” said Roesler.

Other cuts are coming out of a school safety grant, which was reduced by $500,000 that goes to help improve K-12 school security.

All of this, again, is part of the overall plan addressing the shortage in the state’s general fund, which is projected to be at a $325 million deficit at the end of this fiscal year.