Road proposal: How much extra tax revenue will actually be raised? 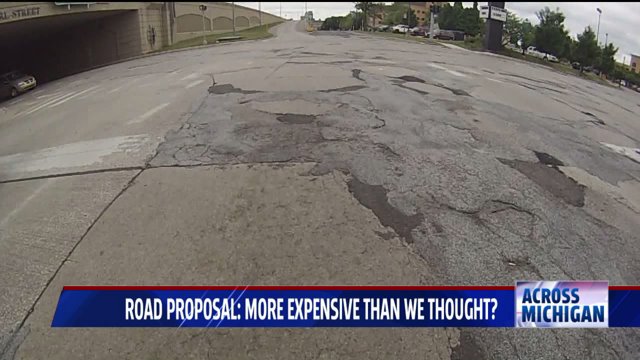 MICHIGAN -- It's a proposal slated for the May ballot that will ask voters to support a state sales tax increase from 6 to 7  percent to raise an additional $1.3 billion in revenue to help fund road fixes.

However, the bottom line of just how much extra revenue the increase would generate for the state remains disputed.

A study released from the Mackinac Center for Public Policy finds the actual tax increase is closer to $2 billion overall. Numbers in the study are based on estimates from the state's non-partisan House Fiscal Agency.

“The discrepancy is coming from the fact that they needed to get more support for this proposal," said James Hohman, fiscal analyst for the Mackinac Center.

According to the Mackinac Center study, approval of the proposal triggers roughly $525 million in additional taxes in the first year, which comes to more than $600 million when the fees are full realized.

Those figures include a gas and diesel wholesale gas tax of $460 million, a $50 million increase in annual truck registration taxes, and nearly $11 million in the first year from the elimination of the registration tax depreciation for vehicles. That figure would be closer to $150 million when fully realized.

“This is a proposal they made in the lame duck session," Hohman said. "It’s just a huge number of bills, a lot of wheeling and dealing to get this in place where the taxpayers are going to vote on it."

"There are other ways of doing it outside of raising taxes by $2 billion.”

The proposal, if passed, means an additional $300 million for school funding and restoration of the Earned Income Tax Credit, both of which should be major selling points, according to Rep. Brandon Dillon, D-Grand Rapids.

“I don’t particularly take much stock in what the Mackinac Center says, but I will tell you this: If approved. thousands of people in this state will actually get a tax cut," he said, referring to the EITC restoration.

Dillon said while the final figure might be closer to $1.7 billion, either way the majority of the funding is going toward road repairs, which is how it was always intended.

“The vast majority of the money generated from this will go directly to fixing roads and bridges," he said. “Whether it’s $1.5 or 1.7 billion, these are all estimates. The most important thing is any significant investment is going to be made into our state’s infrastructure, and it’ll be the first significant investment we’ve made in 25 years."