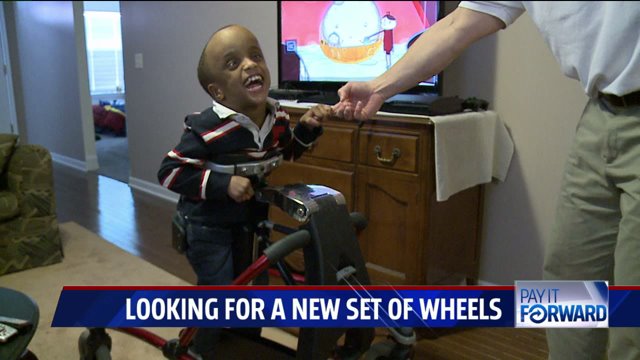 Vote for Caleb or another contestant here until March 4!

GRAND RAPIDS, Mich. -- It’s one many people first memories: getting their first bicycle, hopping on, and taking off.

Owning and riding a bike is something that people might take for granted -- and for many families of children with special needs, it's something they simply can't afford.

But now a statewide competition is helping get bikes to the kids who want to finally get a chance to ride.

The Great Bike Giveaway partners with adaptive bike companies from around the country, providing customized bikes to children and young adults who need it most.

It's all done through online voting -- and then a raffle.

Caleb is one very special young boy who would love bike.

“That’s something we won’t ever be able to give him,” Caleb's father Clay Duba says. “Those little things are just harder for him to do obviously, not being able to walk -- and he just gets a kick out of it.”

But for seven-year-old Caleb, it’s a little more complicated. He was born with a condition called Hydranencephaly -- more commonly known as "water on the brain."

“One of the hallmarks of the condition is it’s a developmental delay," Caleb's mom Dominique Tol says, "so he doesn't walk or talk."

But that doesn't stop his smiling face from embarking on life’s adventures -- and his dream of having a bike of his own.

“The bikes that are made for special needs kids are expensive," Clay says. "This particular one is a $4600 bike."

That’s where The Great Bike Giveaway through The Friendship Circle comes in. Caleb’s parents are hoping they’ll get enough votes to win Caleb an adaptive bike.

“There’s just some stuff that we might never be able to do with him," Dominique says, "so a bike is a realistic thing that every kid gets to do."

One winner is chosen by online votes; the others through a raffle based on donations and votes.

“It’s a lot easier to get equipment that he needs, like a wheelchair -- but insurance doesn’t approve something for fun so this is a way to get something fun,” Dominique says.

It’s a chance for Caleb to have freedom -- and a little fun -- when life`s little challenges can be so big.