Couple who raped, recorded assault of baby girl both sentenced to life in prison 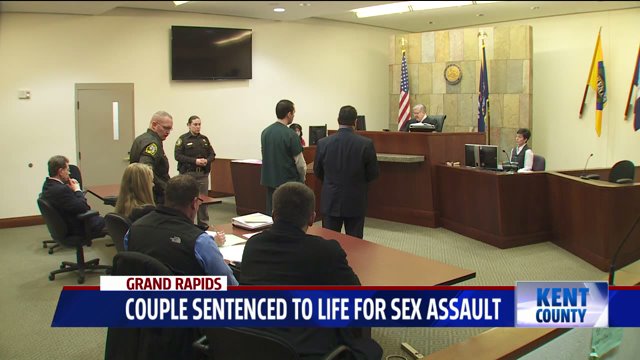 Stevie Foehl, 28, and Michael Emory, 26, were both sentenced to life in prison on first-degree criminal sexual conduct charges by Judge Dennis Leiber in 17th Circuit Court.

"Criminal sexual conduct in the first degree is one of the more serious crimes," Leiber said in court. "I don’t know how to quantify the horror this child was put through."

"To say I’m remorseful is an understatement," Foehl said reading from a prepared statement before being sentenced.

"If I could go back and change my actions I would."

“I’d just like to apologize to the family of the victim," Emory said in court before being sentenced. "Every day I wake up and wish I could take this back, all I can try to do is make the future better, make things better somehow.”

When asked by the judge how Emory found himself in a position to abuse an infant, he replied that "it's a hard situation to explain" and it resulted from a "long line of bad choices."

Both Emory and Foehl recorded the assualt of 1-year-old girl in an apartment in Comstock Park in 2012. The couple took turns recording one another. Detectives found video evidence of the assault on Emory's computer after launching an investigation into another sexual assault involving a 14-year-old from Ottawa County.

Family of the infant victim who were in court for the sentencing did not want to comment.