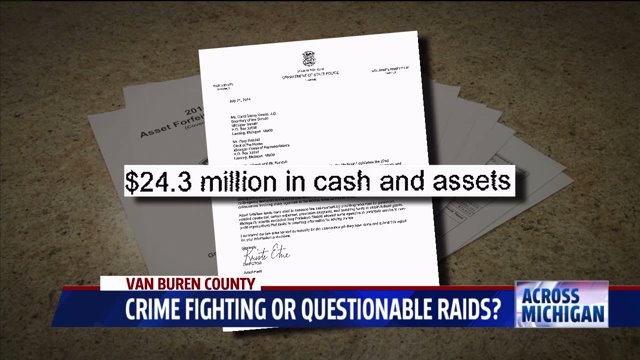 VAN BUREN COUNTY, Mich. -- Should cops have the right to raid your home or even seize it along with other property before you've ever been charged for a crime?

In many cases, it's happening and is still happening across Michigan, bringing in millions of dollars worth of assets and cash to police agencies.

Wladyslaw "Wally" Kowalski lives in Bloomingdale, in rural Van Buren County.  Kowalski, who has a Ph.D from Penn State University and a background in engineering and specializes in ultraviolet light technology, has been a medical marijuana card holder since 2007. He was growing the drug for medicinal use for himself and several designated patients at a home that's been in his family for decades.

The home was raided by the Michigan State Police's Southwestern Enforcement Team in September 2014 after an earlier helicopter flyover revealed the pot plants in his yard to police.

"I realized they were raiding me for the marijuana," he said. "I went right up to them and said 'I'm a legitimate grower and I've got cards, this is a legitimate operation' but they didn't buy it."

A police incident report detailed preliminary investigations leading up to the September raid in which police contended there was no indication Kowalski's plants were part of a medical marijuana grow. Ultimately, police seized 55 marijuana plants and various other narcotic related items from the home.

In total the items taken, including a generator and agricultural pollen extractor, were valued at nearly $1,700, according to the incident report.

Police cited Kowalski's grow area in his backyard not being in compliance with the state's medical marijuana act--with too many plants for the number of patient's cards he held in possession and for being within view for the roadway--as justification for forfeiture.

Kowalski asserts he believed he was doing everything in accordance with the law and was left dumbfounded by the raid.

Kowalski was later arrested and charged with two felonies of manufacturing and distributing marijuana. He could face up to seven years in prison if convicted.

"It's robbery, it's theft," said Daniel Grow, a Kalamazoo-based attorney representing Kowalski and several others in the state in similar situations. He said after the raids, Kowalski's bank accounts were frozen for several months and a lien was placed on the title to Kowalski's home.

"To say you're going to lose your home or have to buy your home back because you've been charged with a crime or only being investigated, the penalty doesn't match the nature of the crime."

A 2010 study from the Institute fro Justice, a Virginia-based non-profit law firm, ranked Michigan among the worst states in the country when it comes to forfeiture laws.

The Southwestern Enforcement Team, or SWET, the division involved in Kowalski's raid, seized more than $370,000 in assets and cash in 2013. SWET is one of 28 multi-jurisdictional task forces under Michigan State Police.

The report states "the primary goal of asset forfeiture is to deter and punish drug criminals by taking away goods, property and money obtained through illegal activity," and goes on to add the law is meant to save taxpayers money when asset forfeitures are used to support state and local law enforcement.

In 2013, thousands in cash and assets were seized by police agencies counties across West Michigan, according to data from Michigan State Police:

Several requests made by FOX 17 for an interview or statement from a representative with the Michigan State Police either on Kowalski's case or forfeiture laws in general were not fulfilled as of Wednesday evening.

Kowalski still has several court appearances ahead of him, while he and his attorney must prove his property was not purchased using illegal drug money, something both maintain is the case.

However, under current civil asset forfeiture laws, even if Kowalski wins his case there might be no guarantee he'll get his property back, according to Grow.

Grow said he's confident they can win the case, hoping this case will set a precedent for others like it.

"If they found a medical marijuana grower that was not in compliance with some technical aspect of the law they should tell you," he said. "Tell you to fix it, not charge you with a felony."

Several recent cases involving forfeiture laws have caught the attention of lawmakers at both the state and national level who are looking for reform.

In January, U.S. Rep. Tim Walberg (R-Michigan) introduced the FAIR Act that among other things, would make it more difficult for police to seize property, and it'd require any money taken by police to be put into a general treasury and not come back to police.

Transparency has also been a focus area among proposed reform legislation. The 2014 MSP annual forfeiture report acknowledged shortcomings in record keeping and lack of reporting what was seized, when, how and why.

There's been movement with reform bills requiring greater transparency at the state level too. Those efforts have since stalled.