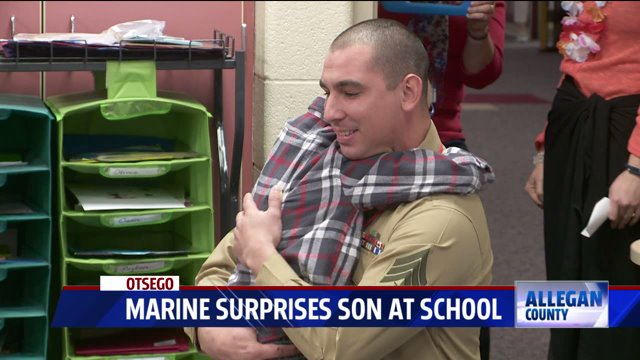 OTSEGO, Mich. -- It was a foggy, sleepy morning outside Otsego's Alamo Elementary School.

However, inside there was an energized kindergarten class preparing for reading time.

Jayden Gall and his classmates learned a "mystery reader" was coming to read to them. The children had to guess who.  They were given three clues.

"So start putting on your thinking caps," the teacher and her students motioned.

"Clue number one: This mystery reader wears a uniform to work," the teacher said.

Meantime, down the hall, the mystery reader waited.

"A little bit of anticipation, but I hope I don't trip," Sergeant Joshua Gall said.

Sergeant Gall is Jayden's father. He's a MARINE, and he's currently deployed and stationed in California. Back in the classroom, the guessing continued.

"This mystery reader used to live in California," the teacher gave the second clue.

Jayden shouted, "My mom used to!"

By the third clue, Jayden put it all together. "My dad lives in California, and he works on helicopters, and wears a uniform."

The teacher asked Jayden if he thinks his dad is the mystery reader. He shook his head 'yes', and she went to check in the hallway.

Sergeant Gall walked into the classroom, and the father and son embraced.

The surprise visit started with a hug and a good read to Jayden's class about the Hermit Crab.
Jayden, who's missed his dad greatly, has their itinerary all set.

"Play with him," Jayden said.

Joshua Gall said, "He just had a birthday, so I'm going to go take him to get a birthday present and on the deployment I made him and my daughter a little treasure chest of all the places that I've been. I've got them stuff from everywhere."

After months of Skyping and talking on the phone, for one week Jayden gets to spend time his father and his hero.