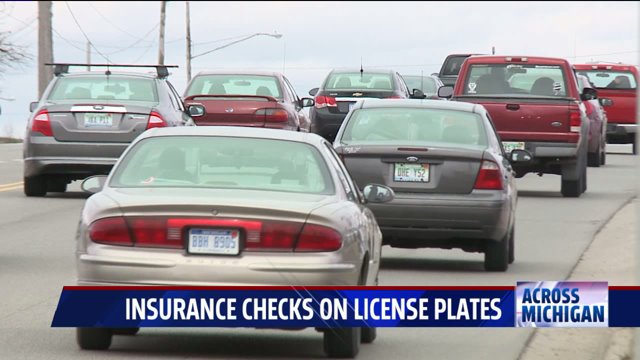 MICHIGAN -- It's something every driver should have on them when they get behind the wheel and it's one of the first things police look for if you happen to get stopped.

But now, some existing technology is providing a new tool that's being used by Michigan State Police and other agencies across the state giving officers the upper hand to determine if you're driving  without insurance.

Officers can run a driver's license plate through their in-car computer systems to access the information which began to be available last September.

Insurance companies are now required to send information to the Secretary of State's office twice a month, on the 1st and 15th, making that information readily available through the statewide Law Enforcement Information Network, or LEIN.

“It’s now linked to the license plate for that car so when we’re on a traffic stop and we run that person’s license plate then it will come back either that they have insurance or don’t," said F/Lt. Chris McIntire with the Michigan State Police Rockford Post.

While the information might be more readily available, it doesn't mean officers will be specifically targeting drivers for just this reason, McIntire said.

Not having insurance for your vehicle is considered a secondary violation which means police technically can't pull a driver over just for that offense, according to McIntire.

“If we pull someone over just for being in violation of this new law and not having insurance, any criminal activity in that car that comes from that traffic stop we would lose because we didn’t have a valid reason to stop them," he said.

“Typically we’re not looking for people who just don’t have insurance and trying to make traffic stops and figure out reasons for that. We’re busy enough."

McIntire adds the new tool also provides officers with an opportunity to crack down on drivers using fake insurance cards or who bought policies from fake providers.

Between September 2013 and March 2014, MSP troopers issued 8,664 citations to drivers for having no proof of insurance. During that same period a year later, the number of citations increased to 10,009, a roughly 15 percent uptick.

Driving without any insurance on a vehicle is considered a misdemeanor offense that could land a person one year behind bars. Drivers who simply don't have proof of insurance during a traffic stop could face fines of up to $140.

McIntire said the system does not show results for commercial or fleet vehicles or motorcycles.