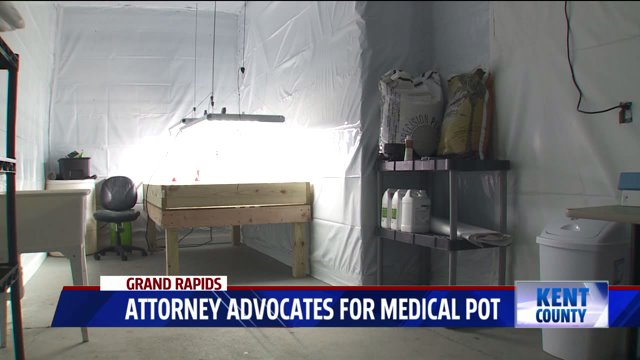 GRAND RAPIDS, Mich. – On Grand Rapids’ west side, a criminal defense attorney has turned an old building into a medical marijuana grow operation he said is legal.

Except on the city’s west side, Herman calls it, “Better get at Matt.”

“I wouldn’t necessarily call myself a marijuana advocate; but I’m definitely one for equal fairness and justice,” said Herman. “I don’t understand why my clients that have really good, spotless records are now becoming felons, because they wanted to become involved with a medical marijuana program.”

Herman is a criminal defense attorney, and he’s taken pot growing out of a basement and put it into a secure facility—a legalized grow op.

Herman’s business is called Cannabis Solutions, and it’s classic supply and demand: Herman admits he’s in it to make money, but at the same time, he says he’s advocating for a more clear-cut law to protect caregivers—the people licensed to grow medical marijuana—and the patients—the people who use it.

“The fact that you can’t use a concentrate or a medible has a lot of people upset,” said Herman. “How do you tell someone that has lung cancer that they have to smoke something? It might not be practical for them.”

Herman called the Michigan Medical Marijuana Act “poorly written.” And it is confusing: “usable marijuana,” as it is defined, does not include marijuana concentrates or medibles; medicine that some patients have said does not get them high, but does cut their pain.

“Grand Rapids has much bigger problems to worry about,” said Herman. “If I could have a place like this that helps curb violence, helps curb home invasions, and all those types of things, and curbs illegal drug use, and drug sales, why wouldn’t (law enforcement) be in favor of it?”

Herman does not grow himself, but has a landlord-tenant agreement with the caregivers on site.

It’s a turnkey arrangement: for about $4,000 per month, and a two-year-lease, Herman provides about $13,000 in equipment and set-up for caregivers to grow up to 72 plants in a locked room. Herman said no one but the caregiver has a key to their room.

Herman’s had law enforcement walk through his set-up. There are also security cameras, and he reviews footage every week. Herman said he will turn in any caregiver he thinks may be breaking the law.

“Some people think it might be unethical for me to be involved with it as a lawyer, and I think it’s the exact opposite: I’m trying to help people understand the law, help them change it so it’s not creating new criminals that don’t belong there,” said Herman.

This is Herman’s only grow facility that’s up and running. He told FOX 17 he has two more sites under construction, then two others he is working out agreements with building owners; each in Michigan.

House Bill 4271 also has some legs. Started in 2013, it would enact the Medical Marijuana Provisioning Center Regulation Act. Essentially, the bill would legalize medical marijuana dispensaries and then expand the definition of “usable marijuana” to include marijuana concentrates.