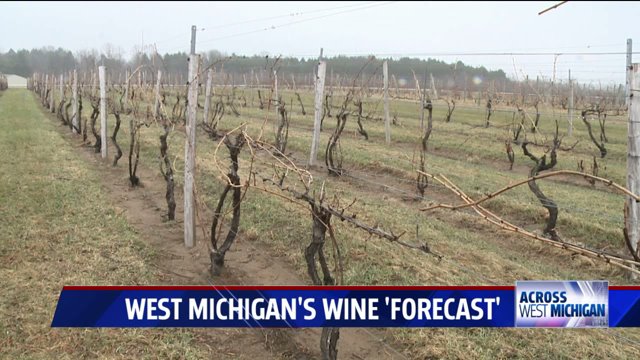 FENNVILLE, Mich. -- The past two winters brought extreme cold temperatures into West Michigan vineyards, making it much tougher for wineries to produce a healthy crop.

Since 1973, Fenn Valley winery has battled Michigan's weather to grow grapes and make wine. The growers at Fenn Valley are keeping their vines a bit messier than normal.

“A normal year if you came out here, this time of year most of the plants would look a lot more clean, where you’ve got just one or two, rather two canes wrapped around the fruiting wire," says Brian Lesperance of Fenn Valley winery.

Instead of a neat vine, Lesperance is deliberately leaving more on the plants so they can see how many buds will push.

Rain and snow help nourish the plants, but temperatures can make or break it for grapes. Chilling temperatures, like those in February that were in the negative double digits, are a cause for concern.

“That’s really where we get into trouble, fifteen and below and lower than that" explains Lesperance.

Winds also keep growers on edge, he says. “East winds is where we lose the lake effect, those couple of nights last year were east winds, that’s really where we see the major problems happen.”

Fenn Valley's crop is looking fair for 2015, while vines to the north suffered more.

“This year it looks like the further south you went, the better off you are" explains Lesperance.

The good news: Lesperance says Michigan is not running out of wine anytime soon. And when asked about his favorite wine he says, "They're like children. We are proud of all our wines."