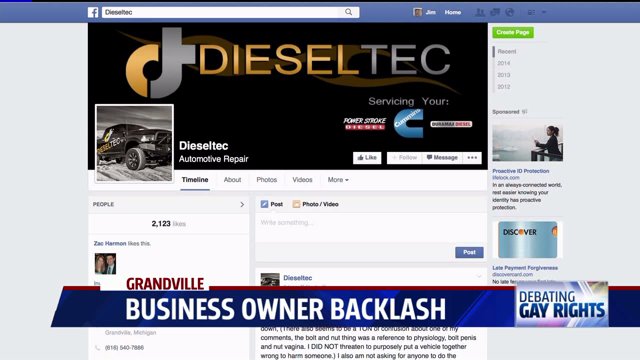 GRANDVILLE, Mich. -- The owner of Dieseltec in Grandville is calling on his supporters to "secure my home and business" following a massive backlash to comments he made about gay people.

On Tuesday, Brian Klawiter posted a lengthy statement on his business' Facebook page calling homosexuality immoral and saying he would refuse service to "an openly gay person or persons."  He also offered to give discounts to customers who brought guns into his store.

Following that post, hundreds of people responded both in support and against his statement.   Klawiter said most of the feedback he's received is negative.  A GoFundMe page set up to support him has been removed.

Several said on Facebook that they hoped he would lose business, and some showed up outside Dieseltec to protest Klawiter's comments.

Another Facebook post Thursday morning says "...If you have an opposing view to mine that IS OK, what is NOT OK is threats to kill me, my family and friends; threats to burn down my shop and my home."