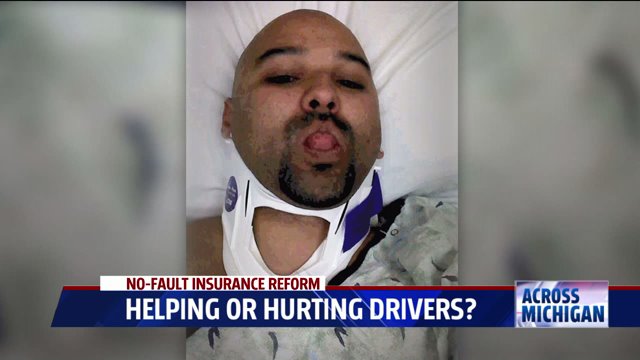 MICHIGAN -- Lawmakers in the state Senate recently pushed through a bill aimed at making changes to the state's no-fault insurance law.

Supports argue the reforms will cut costs for drivers, but opponents like Grand Rapids-based attorney Tom Sinas argue patients hurt in crashes will be left worse off.

Sinas also points to the fact the bill does not specifically mandate rate reductions for drivers.

"Drivers are going to be forced to give up benefits but not get any reductions in premiums," Sinas said. "These changes are going to leave way too much uncertainty going against what no-fault is all about."

In April 2013, Leo Morales was nearly killed when his motorcycle crashed in Ottawa County. He was wearing his helmet but still suffered a severe head injury and doctors said he had to undergo brain injury therapy. Morales claims just a few months after the accident his no-fault insurance, which was covering all his medical expenses and lost wages, cut off payments with no explanation.

“Imagine being head of the family, providing, doing all this different stuff and then turn around and have it be 100 percent reliable on everyone else to get things done," he said. "Knowing you can’t provide, can’t work, and knowing you have this entity telling you they won’t support you when you originally signed up to protect yourself against that.”

Morales, a client of Sinas', filed a lawsuit against the insurance company and eventually won a settlement that covered all of his medical bills, lost wages and attorneys fees.

Sinas argues the recently passed reforms--which calls for the creation of an authority to investigate and crack down on fraud and abuse in the systems--doesn't provide any oversight for insurers, adding Morales' case demonstrates insurers can be guilty of fraud and abuse too.

“The bill is completely one sided, it only wants to look at fraud on behalf of people filing claims and it’s not interested at all at looking at fraud or abuse by insurance companies," Sinas said. "I don’t know how you can have a fraud authority that only looks at half the picture.”

Sinas said the proposed fraud authority would include a 15 person board with eight of those people appointed by the insurance industry.

Morales said he chose to share his story in hopes of providing context for why he feels true reform is needed for Michigan's no-fault system. He said he's skeptical a bill like this could adequately address the necessary issues when it was pushed through the Senate in less than 48 hours.

“Leo was supposed to get his medical bills paid and his wages paid and he didn’t," Sinas said. "And he had to hire a lawyer and he never should’ve. This bill is not going to help the next Leo.”

The bill wouldd also replace the current Michigan Catastrophic Claims Association with a new board that is said would provide more transparency. Currently drivers pay an annual $186 vehicle fee assessment into the catastrophic claims fund.

The bill now heads to the House for consideration.