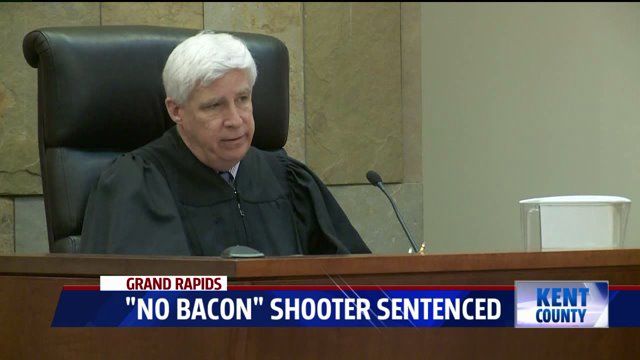 GRAND RAPIDS, Mich. -- Shaneka Torres was sentenced to between three and seven years behind bars Tuesday after being convicted of opening fire on a McDonald's drive-thru after her burger didn't have bacon on it.

Officials say on the morning of Feb. 10, 2014, Torres was a passenger in a vehicle that went through a McDonald's drive-thru near 28th Street and Madison SE.   She ordered a burger with bacon, but when she received her order and it didn't have bacon.

Evidence showed a bullet hole near the top of of one sliding window at the McDonald's drive-thru, roughly two feet above where an employee had been standing.   The employee was checking on Torres' wrong order at the time of the shooting.

Shaneka Torres, woman who fired gun into McD'drive-thru window after not getting bacon on her burger sentenced to 3-7 years @FOX17

The defense argued that Torres fired her gun by accident.