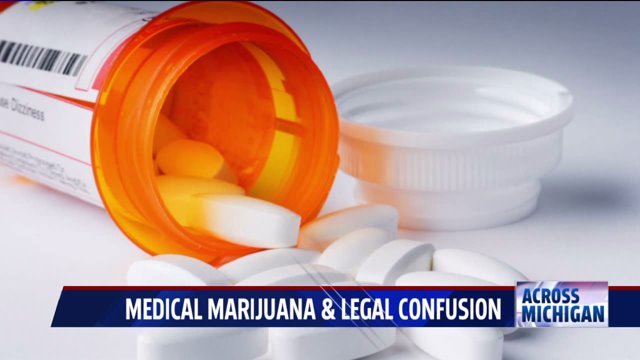 Max Lorincz is a father from Spring Lake who is fighting for his right to use medical marijuana, and get his son back. He’s a card-carrying patient, but was charged with a felony, after a single smear of oil was found in his home.

After Lorincz’s probable cause hearing has left him waiting for a decision from a judge.

Like many card-carrying medical marijuana patients across the state, Lorincz is caught between his doctor’s orders and a judge.

“When I follow my doctor`s recommendations that`s when my health started to get better; going back and following what the judge is saying, my health is just deteriorating ever since,” said Lorincz. “So it`s a scary road I`m going down, but I have to comply with what they`re asking and I just don`t know what else to do.”

But his case has come with some devastating consequences. In February Lorincz was charged with a two-year felony: possession of a schedule 1, controlled, synthetic substance. Schedule 1 is defined as a controlled substance that has no medical use.

Now his five-year-old son is taken away, and he is left with only supervised visits. All of this because Lorincz called 911 in September for a family medical emergency. The deputy who responded to the call found a smear of butane hash oil in his home. It’s a substance Lorincz ingests for what he called “deep pain relief,” and is something he obtained with his medical marijuana card.

“I’m outraged by it, it shouldn’t have happened,” said Komorn.

Komorn said medical marijuana is not a controlled substance. In fact, Michigan law states marijuana is a schedule 2 drug. Yet because Lorincz is charged with having a schedule 1 drug, and not specifically marijuana, Komorn said it is difficult to protect Lorincz under section 8 immunity of the Michigan Medical Marijuana Act.

“They had a policy change by why?” asked Komorn. “The policy changed. The motivation for it was if they report it this way, people like Max won’t be able to claim a medical marijuana defense.”

The lab technician in Lorincz’s case testified that he has been testing tetrahydrocannabinol, or THC, for 25 years. THC is the main psychoactive ingredient in marijuana, also present in synthetics. However, a recent policy change means the technicians have to write “origin unknown” when testing this type of THC on lab reports. The technician said he could not tell if the sample was synthetic or natural.

The prosecution argued Lorincz’s residue was not “usable marijuana,” as defined in the previous court case, People versus Carruthers; therefore, Lorincz should be bound over for trial. However, Komorn argued that a hash extraction comes directly from the resin of the plant.

Komorn said this lab policy change is the difference between a felony and no charge at all for Lorincz, stating he should be protected under the Michigan Medical Marijuana Act. Komorn asked the judge to dismiss it.

“(The lab technician) admitted that on the stand,” said Komorn. “That is very, very, very disturbing to me, because it means that the politics in the law are affecting the truth. That’s not how it’s supposed to be. We’re supposed to rely on science to make the case.”

For now Lorincz said he is following court’s orders and is back to taking what he calls debilitating prescription pain-killers.

He is fighting to get his son back, and then to use the medicine he says works best, without having to smoke it.

“If nobody stands up for this and it just keeps going the way it is, how many more people are going to get thrown under the bus just for using their prescribed medicine?” asked Lorincz. “It`s just ridiculous.”

Stay with FOX 17 on this case for the outcome. Meanwhile, pending legislation that would re-write the medical marijuana laws, including House Bill 5104, have been introduced in Lansing.