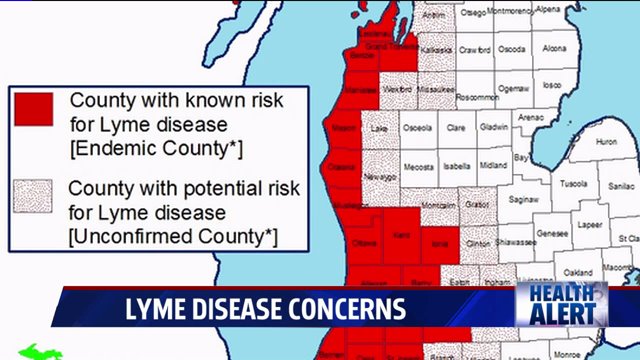 GRAND RAPIDS, Mich. -- Lurking in West Michigan's parks and backyards is a danger that only comes out when it's 45 degrees and warmer. The danger is deer ticks, known in the entomology community as blacklegged ticks. The bugs emerge in the spring and summer.

“I brushed by a branch, and a tick went into my ear" says Jill Post, “About two and half weeks later, I felt extremely ill, like it was the worst flu of your life.”

Post picked up a tick with Lyme disease while hiking the Sleeping Bear Dunes. No test for Lyme disease is 100% accurate, and Post was not correctly diagnosed for four years. By that time, there is no cure. But if caught early, Lyme disease is curable.

“I’ve actually had Lyme disease twice," explains Paul Keenlance professor of natural resources at Grand Valley State University, "I do wildlife research, so I’m outside a lot, and with me my symptoms were fairly typical. It was kind of like a real mild flu for the first couple of days, and then I got the real stereotypical joint pain. But it varies."

Prof. Keenlance was treated right away and cured, because he recognized the symptoms and knew he had been in an area where the blacklegged tick is common.

The Michigan Department of Health and Human Services has identified 18 counties in lower Michigan, including most counties in West Michigan, as having infected populations of ticks with Lyme disease. It's caused by a bacteria that is transmitted by the tick when it bites.

But Keenlance has some good news. “Not all ticks are infected with the bacteria, and normally the tick has to be attached for about 24 hours before transmitting . There’s some flexibility there."

Deer ticks are only active once the temperature hits 45 degrees and warmer. They can be found anywhere but are more prominent in areas with large deer and rodent populations and usually in areas with tall grass or brush.

“The ticks will actually wait on that and wait for an animal to pass by and then, as your leg brushes by, they’ll get on your leg or your arm," says Keenlance, "so if you’re walking through that kind of an area--thicker undergrowth--it’s more likely that you can encounter the ticks.”

Keenlance recommends tucking your pants into your boots, wearing long sleeves, and using a bug spray with 30% DEET.